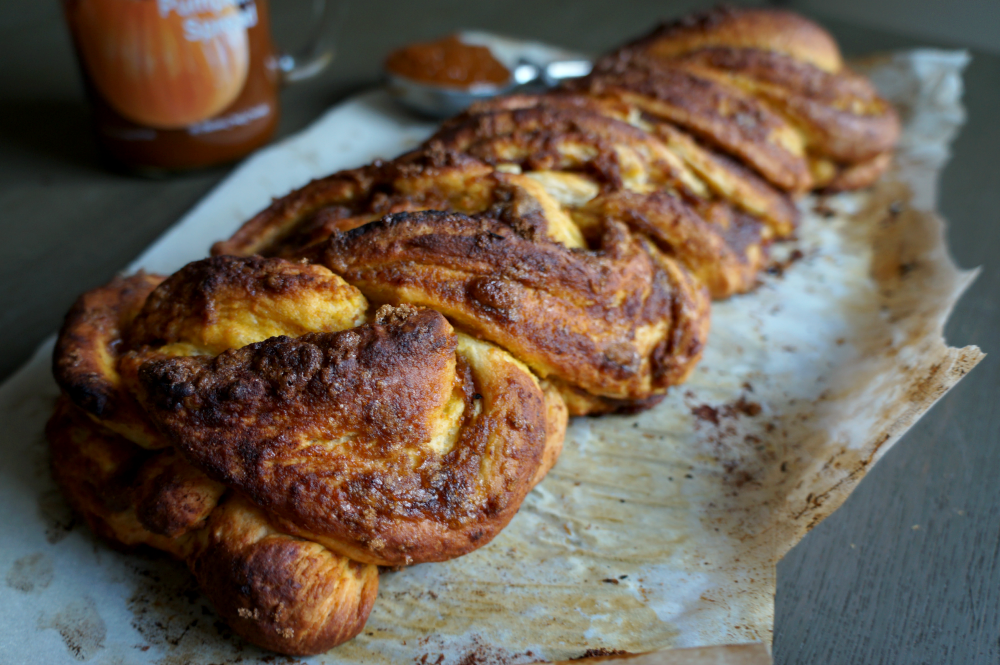 It’s almost Thanksgiving, you guys! That kinda freaks me out. I know some bloggers have already started posting Christmas recipes, but there is seriously SO MUCH I still want to make for this fall season that I feel like I’m running out of time! My mini-rule is that I don’t post about all things red, white, and green until after Thanksgiving {though you are free to roam the archives for something Christmas-y}, but in actuality, as soon as November starts, my brain is in FULL Christmas mode. I may or may not have already set up my tree. And hung up a “Merry Christmas” garland. And put up my ornament wreath… indoors of course, so my neighbors don’t think I’m crazy. Food-wise, though, I like to hold off on the peppermint, and enjoy pumpkin, apple, and sweet potato recipes for as long as I can! The November H-E-B Primo Picks included this darling jar of small batch pumpkin butter {or, technically speaking, pumpkin spread} that’s made locally in Austin with just a few, simple ingredients! These include pumpkin, cinnamon, and rain water. Seriously! Delicious and environmentally conscious, I dig it. 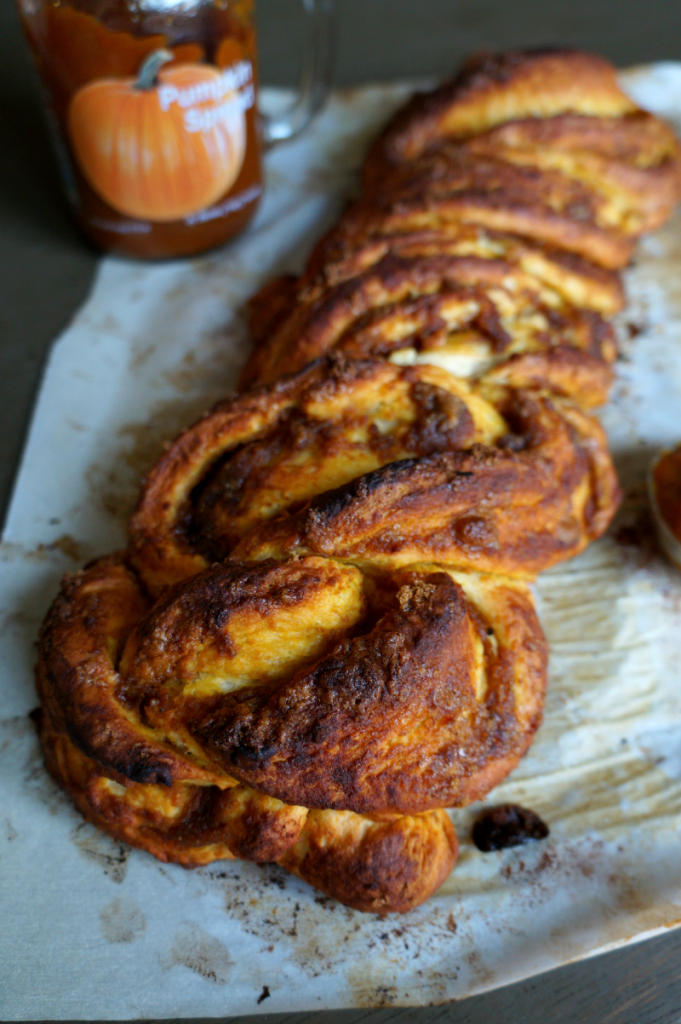 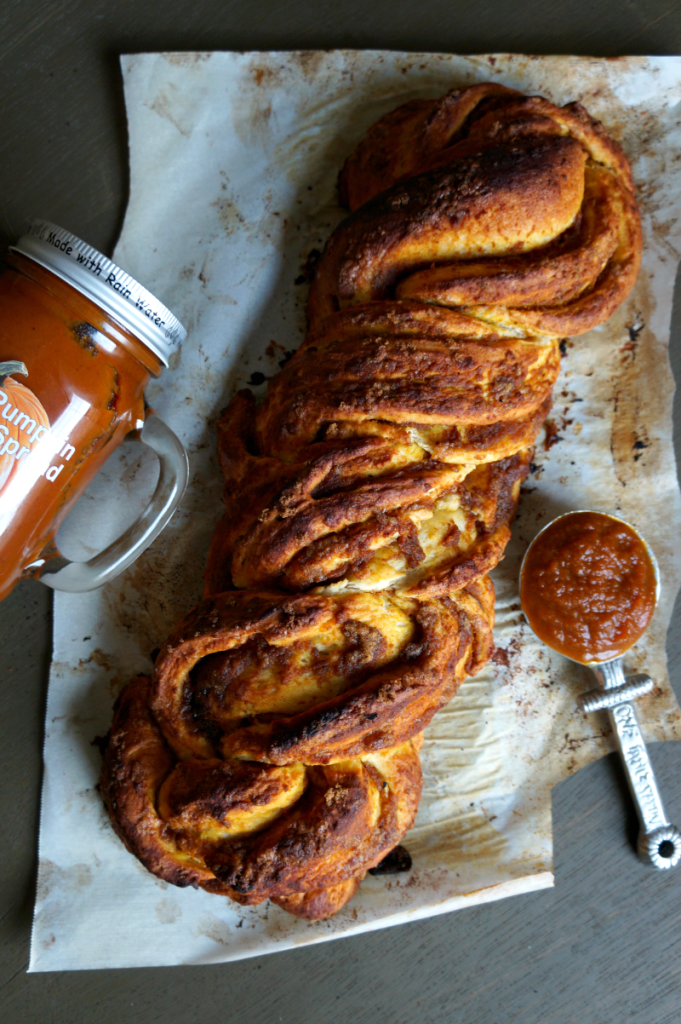 I made this braided bread using cinnamon roll dough, and simply filled it with the pumpkin butter, actual melted butter, brown sugar, and pumpkin spice mix, and topped it off with more butter and brown sugar for a yummy caramelized crunch. Believe it or not, this is actually EASIER and faster than making cinnamon rolls! In my opinion, though, this looks so much fancier and impressive. Here is how it works… you make your dough in the evening and let it rest all night long so it gets nice and puffy and soft. Then, when you’re ready, you roll it out in a big rectangle and slather the surface with the melted butter and pumpkin butter, and sprinkle on the brown sugar and spice. You roll it up, cinnamon-roll style {though be sure to roll this tightly, not loose like you would for rolls! You don’t need extra room for them to rise}. After you have your nice little roll of dough, you take a sharp knife and cut the roll in half lengthwise. I KNOW, I know. Crazy. But trust me! This is where all the delicious flaky layers come from! You then turn your roll so that the exposed layers face up, and simply overlap one half over another the whole way down. So, I mean, it’s called a braid, but you’re only working with two pieces which makes it way easier! It sounds harder than it is, so I suggest looking at pictures from THIS post if you’re needing some visual assistance! That’s where I got my technique from, too. 🙂 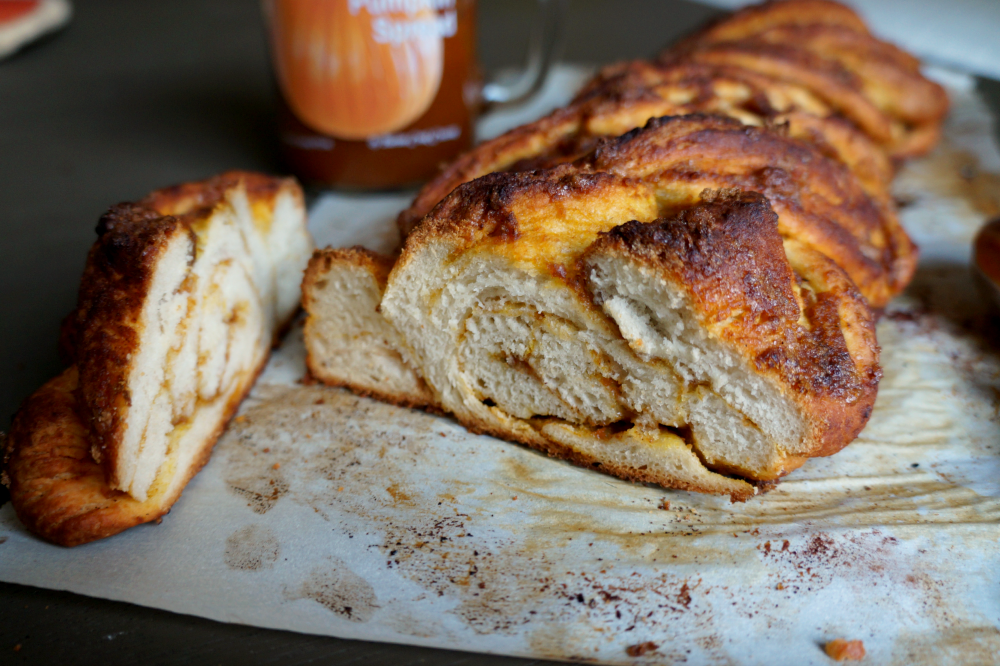 You can find this yummy Barton Creek Crossing Pumpkin Spread and other delicious monthly specials at your local H-E-B for a limited time. See all the featured items HERE, then find a store near you HERE. Don’t forget to follow H-E-B on Facebook, Twitter, YouTube, and Pinterest. Happy shopping!

Disclosure: I received materials from H-E-B for this recipe. Posts are truthful, and all thoughts and opinions are my own and not influenced by this sponsorship. Recipe is an original creation by Valentina Celant at TheBakingFairy.net