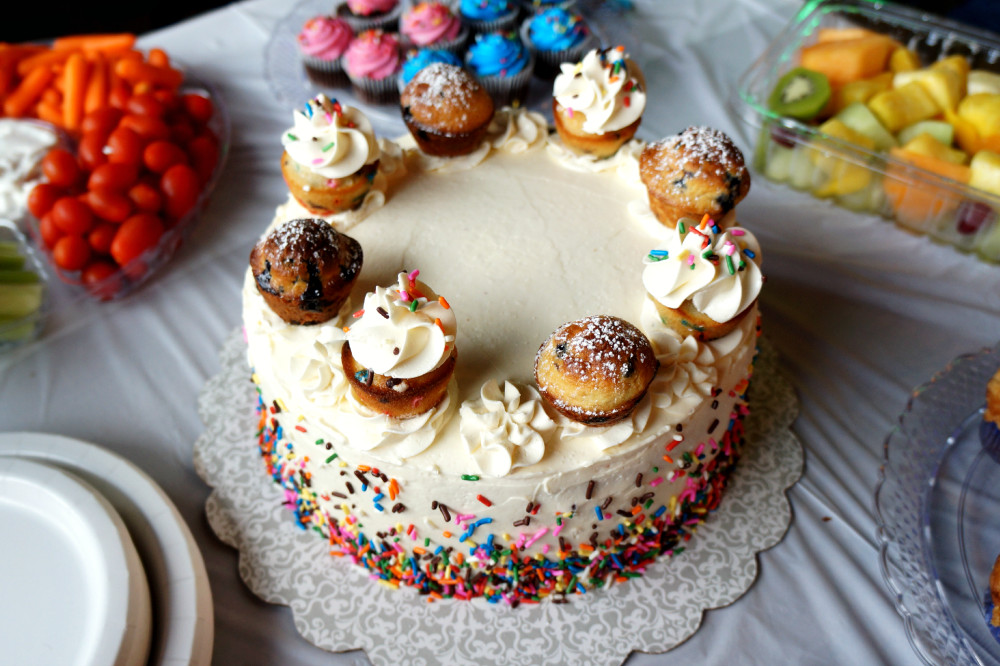 Hello, my loves. As you will know if you follow me on Instagram, I am on vacation in Florida all week! I've been beaching it up and getting tan, and I've had some free time to blog. Buuut... the only downside is that I haven't been anywhere near a kitchen to make actual food. So I've just been sharing recent orders and cleaning out my blogging folder. This is a completely, unbearably adorable baby gender reveal cake I made for one of my high school friends. In, um, November. Well, this is awkward. But it's just too cute to be limited to one lonely picture in my Orders page, so I had to share! Better late than never, in my opinion. 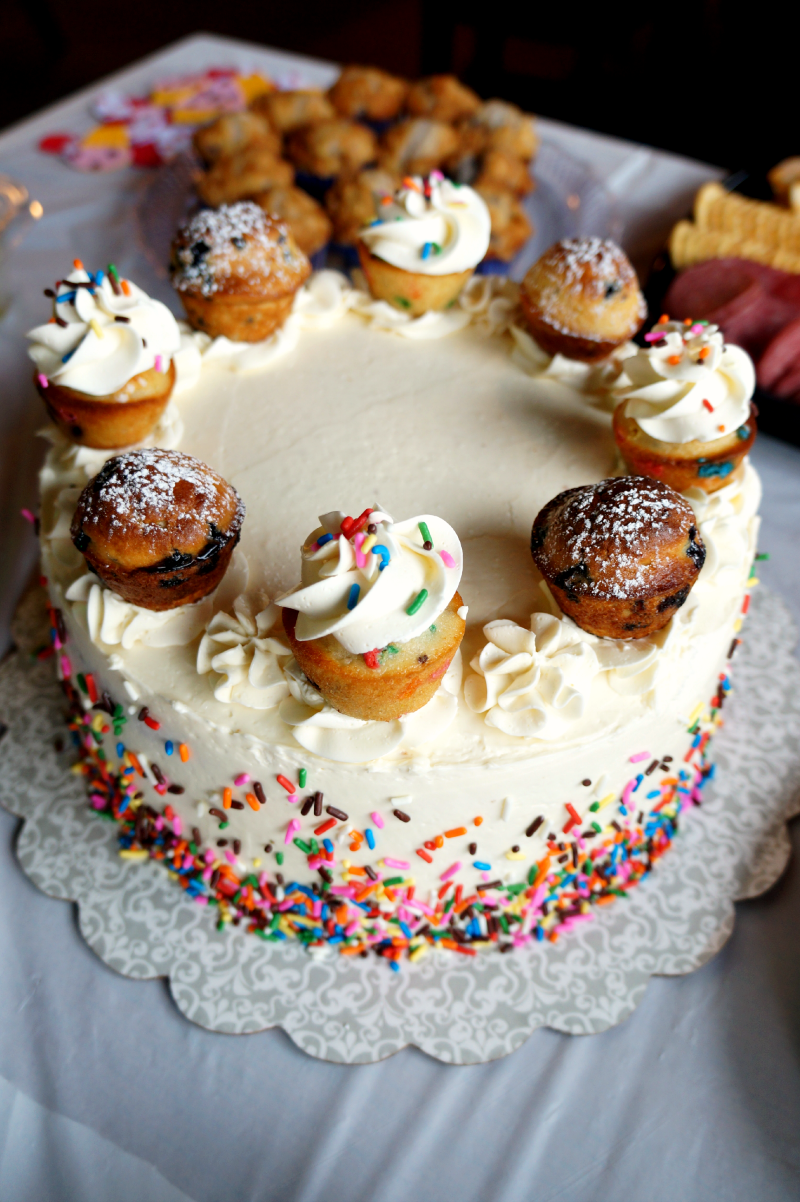 This little sweetheart is made of two 8-inch layers of confetti vanilla cake, sandwiched together with a layer of bright PINK buttercream! My friend had her baby months ago, so surely I'm not spoiling the surprise for anyone now 😉 The outside was then frosted with vanilla swiss meringue buttercream, decorated with little swirlies on top {made with my trusty Wilton 1M tip}, and topped with tiny little confetti cupcakes and blueberry muffins. The adorable factor is just off the charts for this one. The whole thing was then decorated with rainbow sprinkles, aka my favorite thing! In case you're wondering how I got the sprinkles on there, well... I literally just tossed them on. Like. Just threw them on there. And in case you're also wondering, YES, I swept up sprinkles in my kitchen for weeks afterwards. 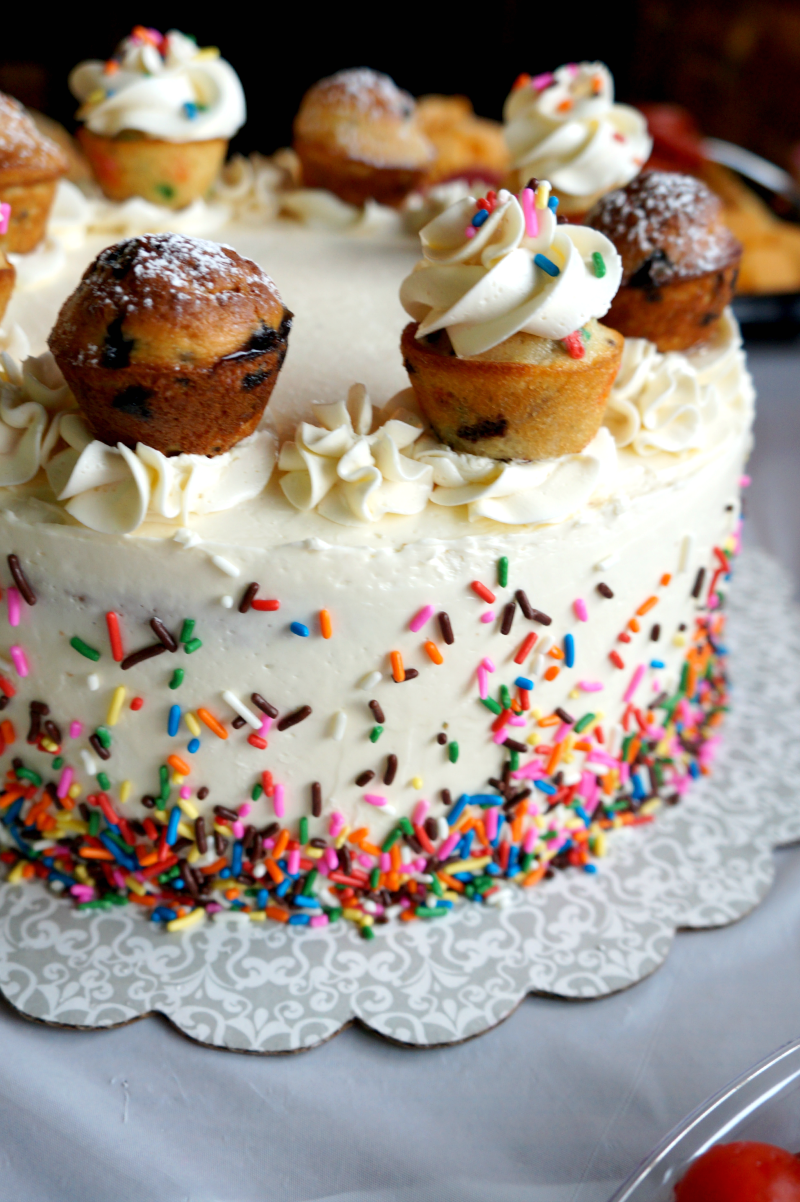 Originally, the mama wanted the cake to be coffee cake {because she was one of the people who attended that turquoise and white wedding and absolutely loved it}, but then she realized that maybe not everyone would love that flavor of cake as much as her, so we went a more traditional route with vanilla, with a generous sprinkling of rainbow jimmies inside. She was also initially very anti-pink, and was wanting the inside of the cake to be yellow if it was a girl, and blue if it was a boy. We then decided to scrap the idea, since we figured that nobody was going to be really sure what it meant when she cut the cake open and the inside was yellow. Looking back, I think this is totally hilarious because she has dressed her baby girl in the pinkest, frilliest, most princessy outfits I've ever seen since the day she was born. The irony is not lost on me. 🙂 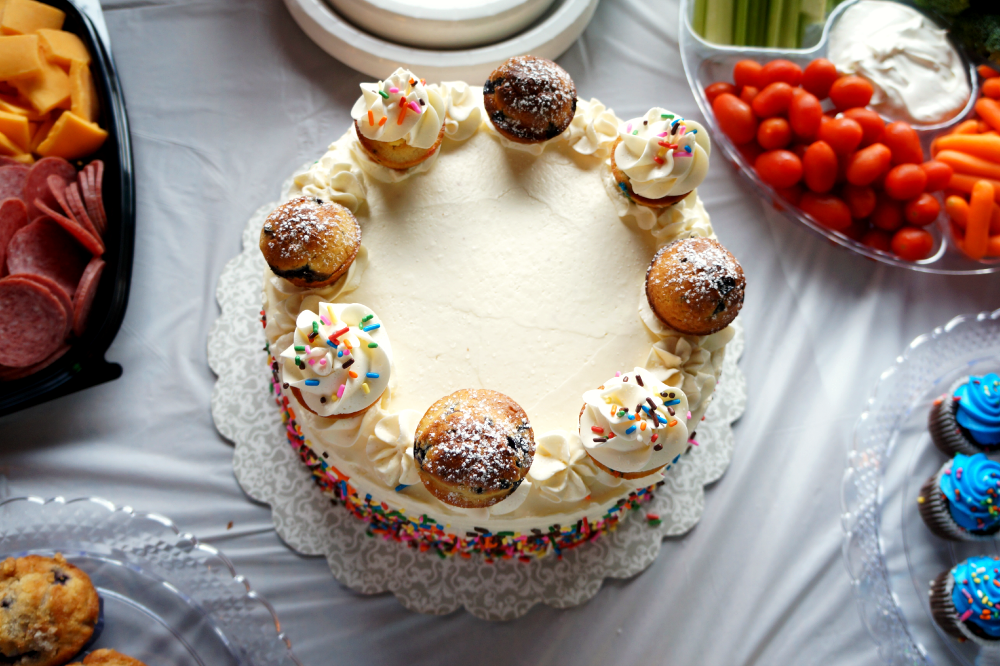 I thought this theme was absolutely adorable, unfortunately there were no cake ideas online for me to look at! Literally none. Of course, there's the classic "serve cupcakes and muffins" thing, which she of course did, but I wasn't able to find any cake ideas for the theme! I just had to brainstorm and sketch it out, and I have to say I'm super pleased with how it came out! I thought that putting cupcakes and muffins on top of a cake was going to be obnoxious, but I'll admit that since they were mini, they worked out perfectly. If you're looking for a gender reveal cake, I hope this gives you some inspiration. Happy baking! 🙂