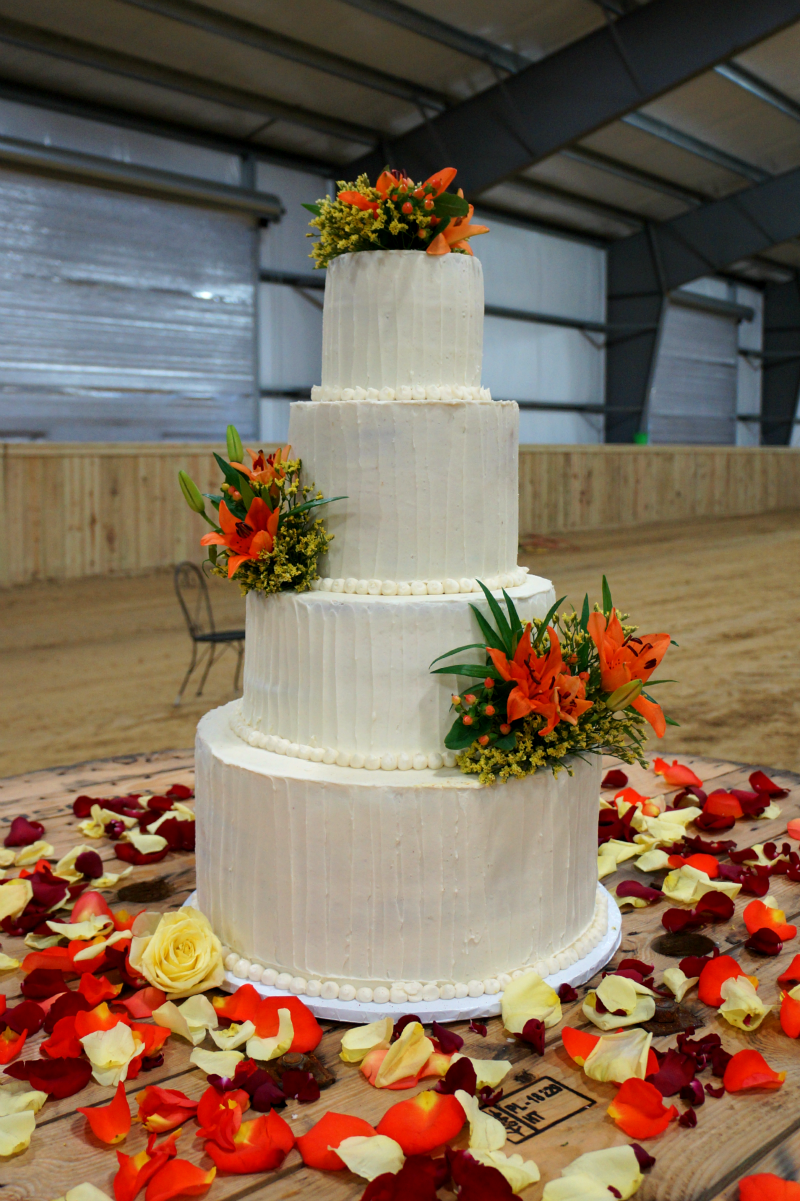 Hello, lovelies! So today, I am sharing my biggest wedding cake yet! This mammoth is made of four tiers of cake, each made of four individual cakes, with the bottom cakes being 16" across, and topped with 12", 8" and finally 6" for the topper. This was huge and such a big project, but it was so much fun. Before I get into all the nitty gritty details, I want to do some math with you. I had to whip up 2 batches of chocolate cake, 4 batches of vanilla cake, and a whooping 9 batches of molasses spice cake... so that's a total of like, 33 cups of flour, 20.5 cups of sugar, 50 eggs, 9.25 cups of butter {which is like...18.5 sticks}, 13 cups of whole milk, and almost a whole pint of vanilla extract. HOLY MOLY. And that isn't even counting the four trillion batches of buttercream I had to whip up. 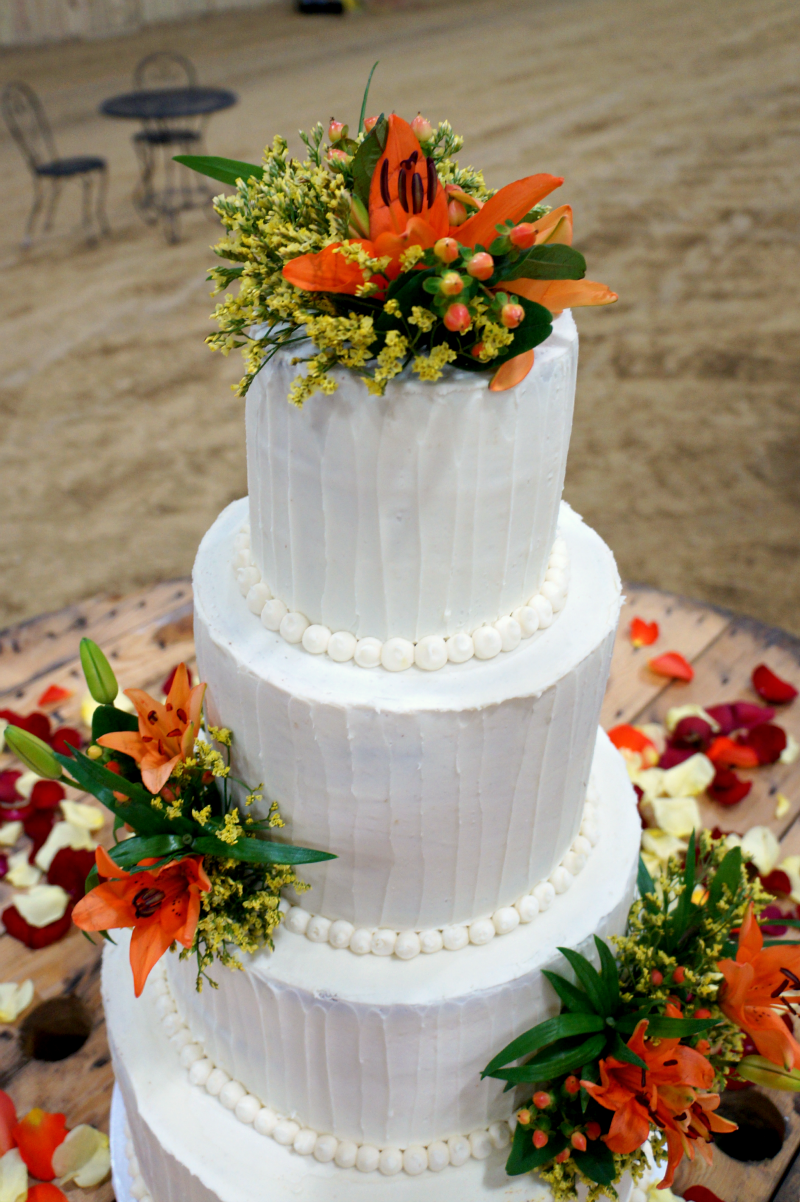 Since it was my first time making a cake this huge, it was definitely a learning experience! So I'm here to share some wisdom with you all. The first tidbit of information being, did you know 16 inch cake pans do not, in fact, fit in a normal oven? I discovered this as I was trying to manhandle this giant pan full of cake batter into the oven and the over door just wouldn't shut. Imagine me, on my fourth day of working on this cake, at wit's end and with a 15 pound pan full of liquid cake in my hands. It's hilarious now, but at the time I kind of wanted to throw that cake across the room. SO, I got creative and put the pan on the highest rack possible {so the oven door could shut as much as possible} and packed the open parts of the oven door with foil. It ended up working just fine! Actually hysterical, but at the time, not so much 😉 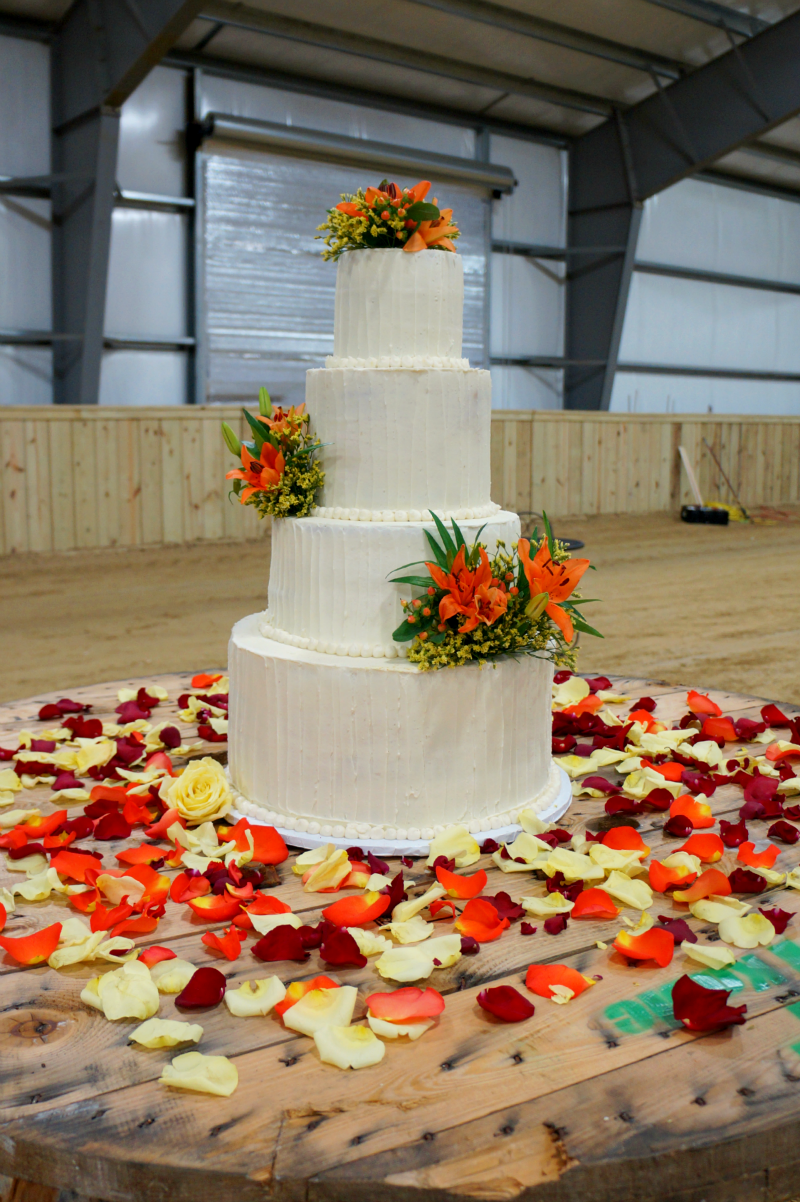 I also discovered cake drums this time around! My cakes have always been small enough that a cake board was sufficiently supportive, but this giant needed a thicker and sturdier base. I bought mine from Cake Supplies on Sale, and it shipped really quickly! Their customer service was pretty great, too. I also found out how useful it is to leave small cake boards under each cake as you stack them... I would've never thought to do that, but the support definitely helps. And speaking of support, use cake dowels! Do it do it do it. Such lifesavers. I've always used bamboo skewers cause again, my cakes have never been this big/tall/heavy, but those dowels are awesome. My local craft store was actually sold out of the actual wooden cake dowels in the cake decorating aisle, but I found really long wooden dowels in their woodcrafting section which ended up being cheaper, and long enough that I could put an entire one in the center of the whole cake to support it. I ended up spending like, one dollar on three 18" dowels that I ended up cutting down to size. 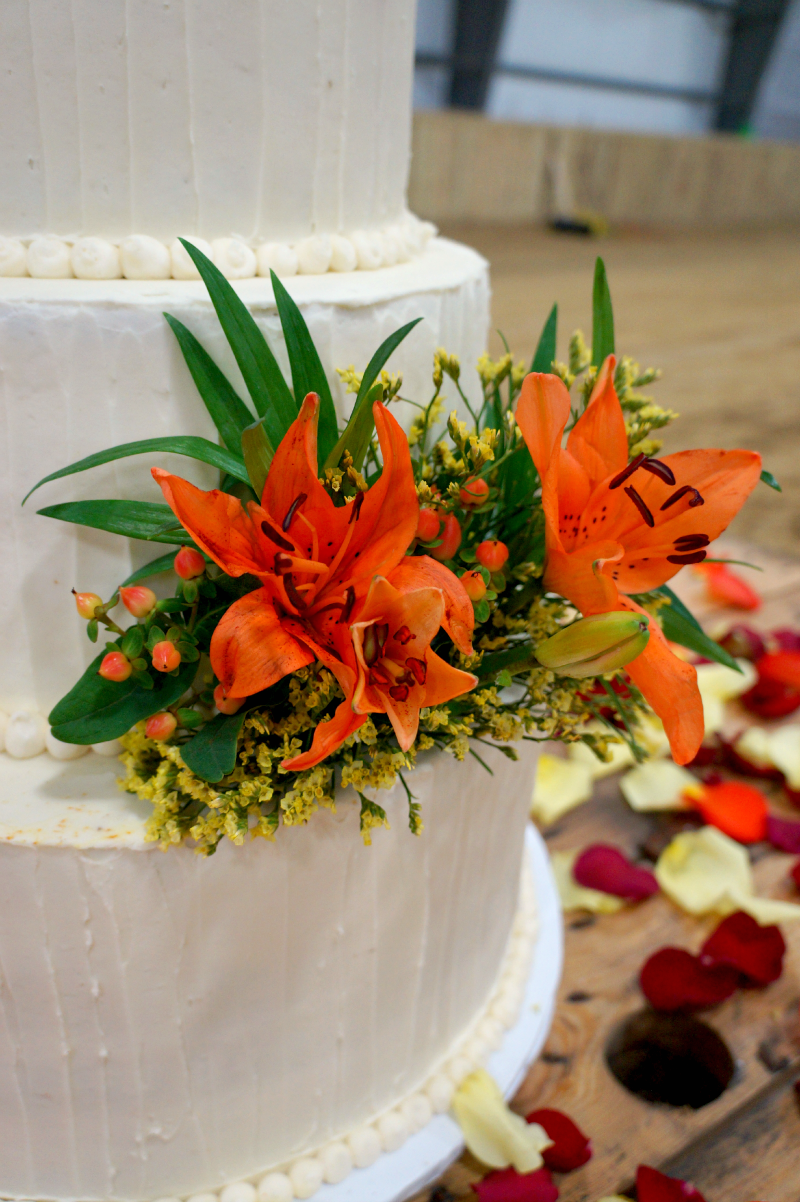 This doesn't have anything to do with the size of the cake, but it was also the first time I used fresh flowers to decorate a cake. I just cut the stems down to size, wrapped them in a bit of foil, and poked them straight into the cake. Easy peasy! The frosting style the bride wanted was thankfully really simple, which was great since this cake was huge. She just wanted simple lines on the frosting, with a pearl border at each tier. To make the lines, I simply smoothed on a thick layer of frosting, then used my small offset spatula and simply dragged it straight up through the frosting to create subtle lines. The pearl border was made with a Wilton #12 round tip. Simple and so sweet! 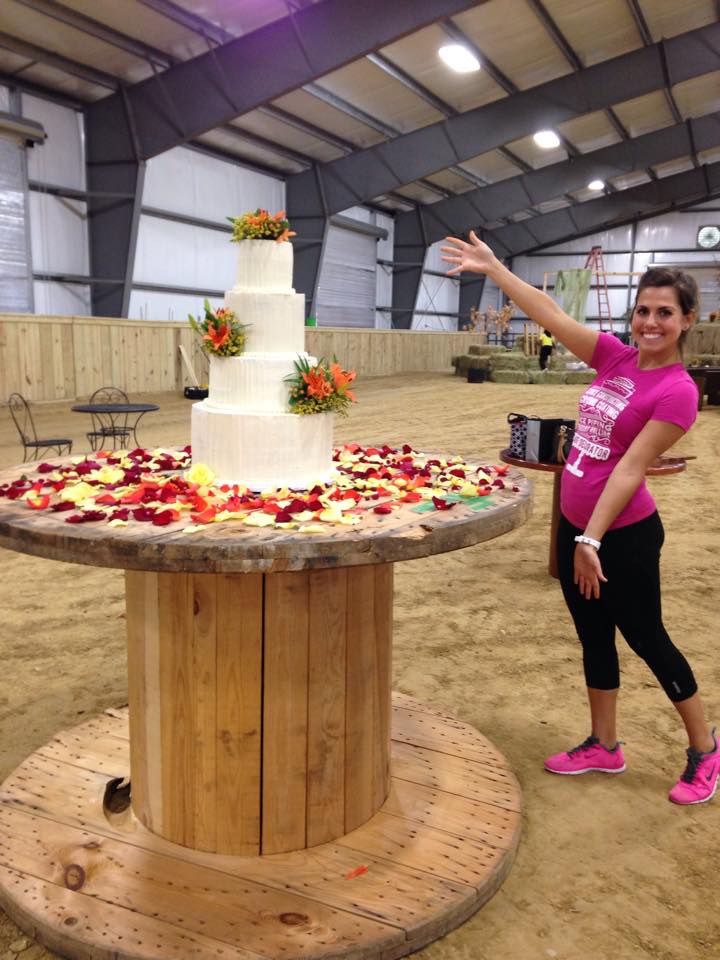 Here I am with my masterpiece! I feel like, even with me in the picture, it's hard to tell how big this thing really was. It was so tall and heavy that we had to transport it in two separate halves and stack them at the venue! Altogether, it was probably close to 3 feet in height and like a million pounds in weight. This was so much fun and a great learning experience, but I don't think I will be specializing in giant cakes anytime soon 😉 Let me know if you have any questions! In the meanwhile, happy baking!