This Vegan Cinnamon Swirl Cake is warmly spiced and irresistible, with a crunchy cinnamon sugar crust, covered in cinnamon frosting, and decorated with pretty fresh flowers! 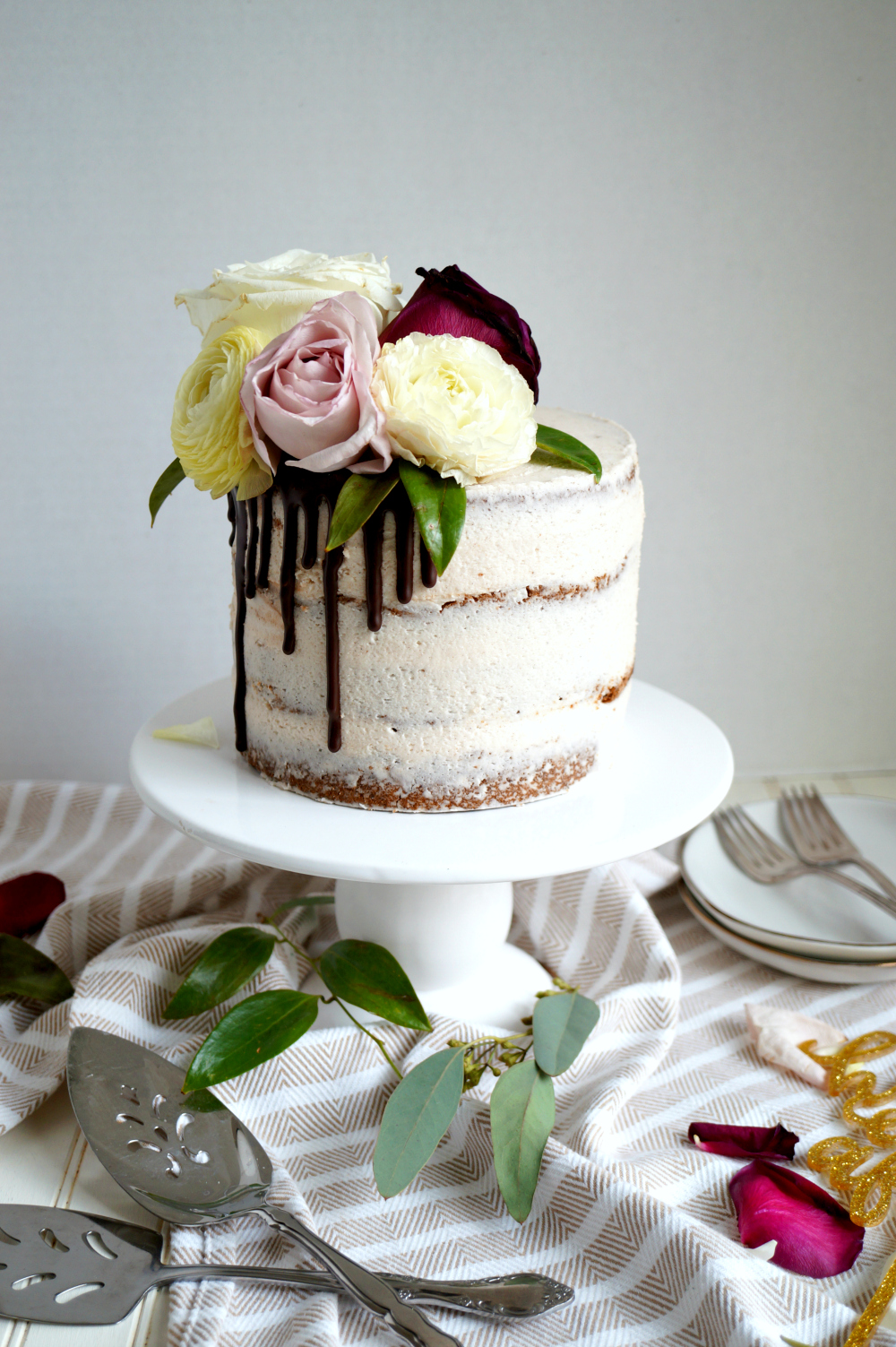 Hi buddies and happy Tuesday! I have a super special recipe for you guys today - Vegan Cinnamon Swirl Cake. What's so special about it, you wonder? Well, today is my one month wedding anniversary, and I thought it would be fun to celebrate by sharing a replica of my wedding cake's top tier! ???? The original was made by the amazing Jenny Layne Bakery and it wasn't vegan, but well - you know me. I had to at least try. And I am just obsessed with how delicious this cake turned out! 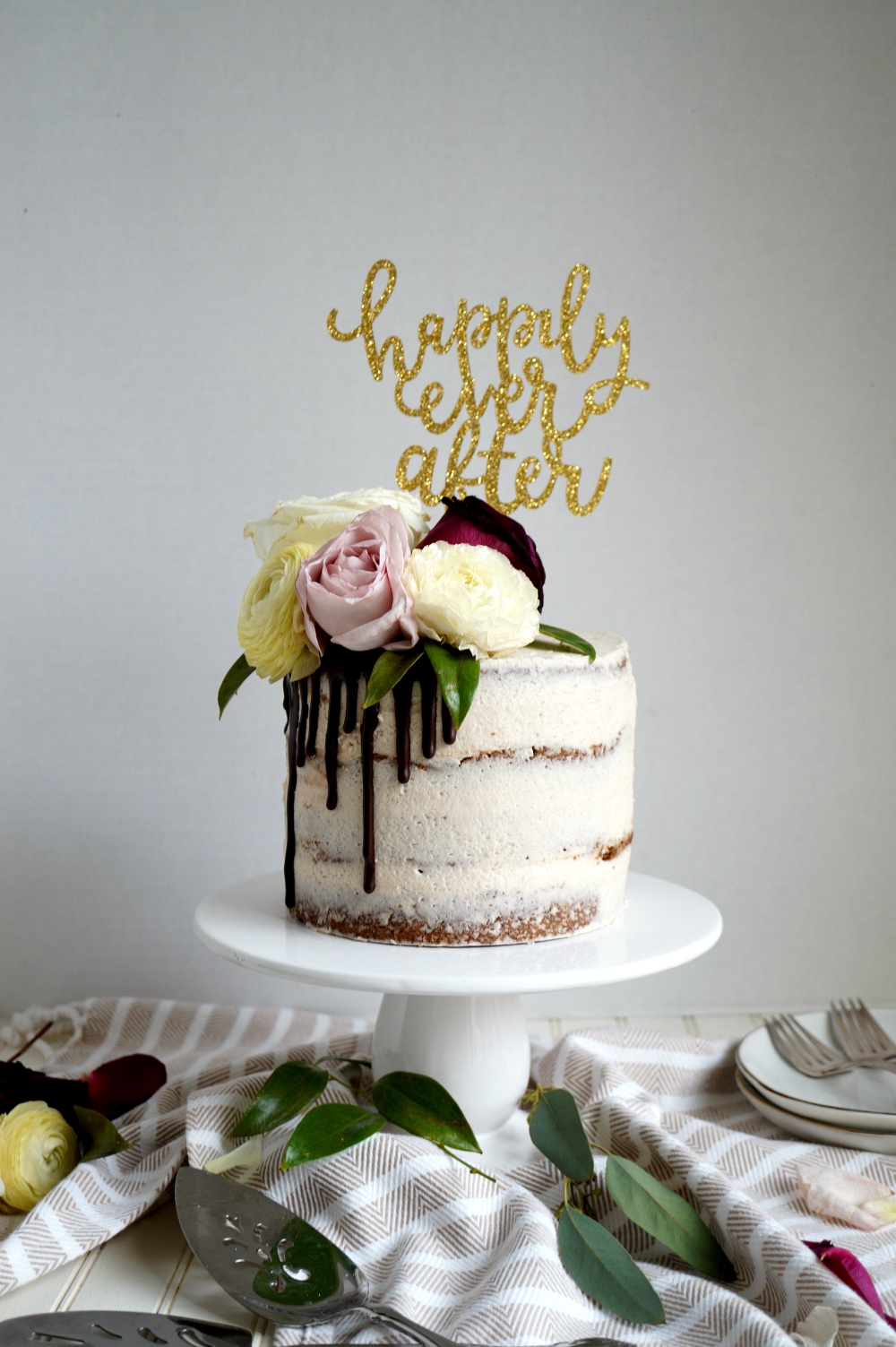 You may remember that I shared about our cake tasting with Jenny a few months ago, and we tried so many delicious flavors. It was so hard to narrow it down! We decided it was too difficult to pick just ONE flavor, so we did three different flavor combinations for our three tiers 🙂 The top was a cinnamon swirl cake with cinnamon cream cheese frosting, the middle was this amazing strawberry hibiscus cake with coconut and pecans and a strawberry cream cheese filling, and the bottom was chocolate cake with Oreo filling. It was all SO GOOD! 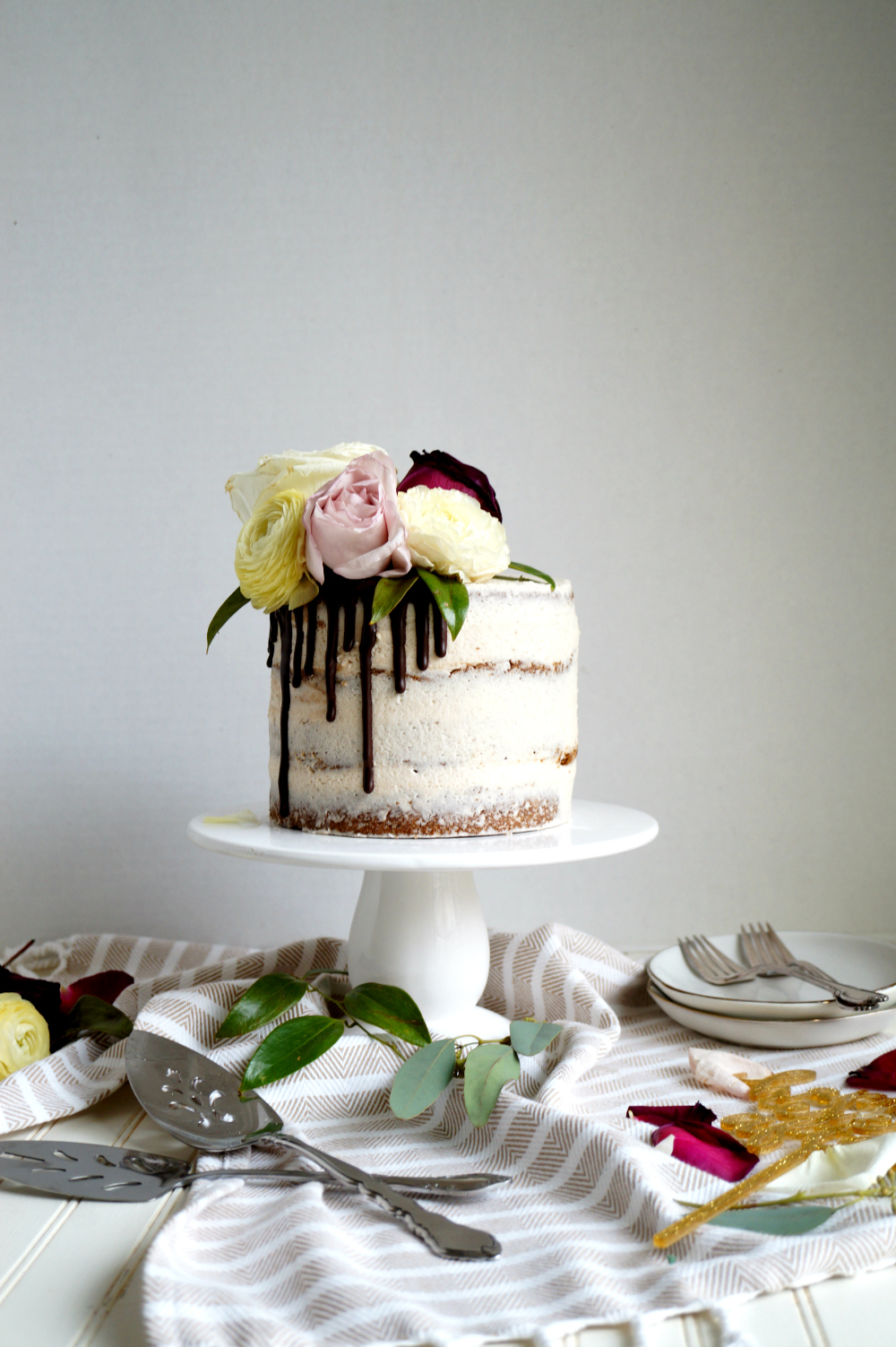 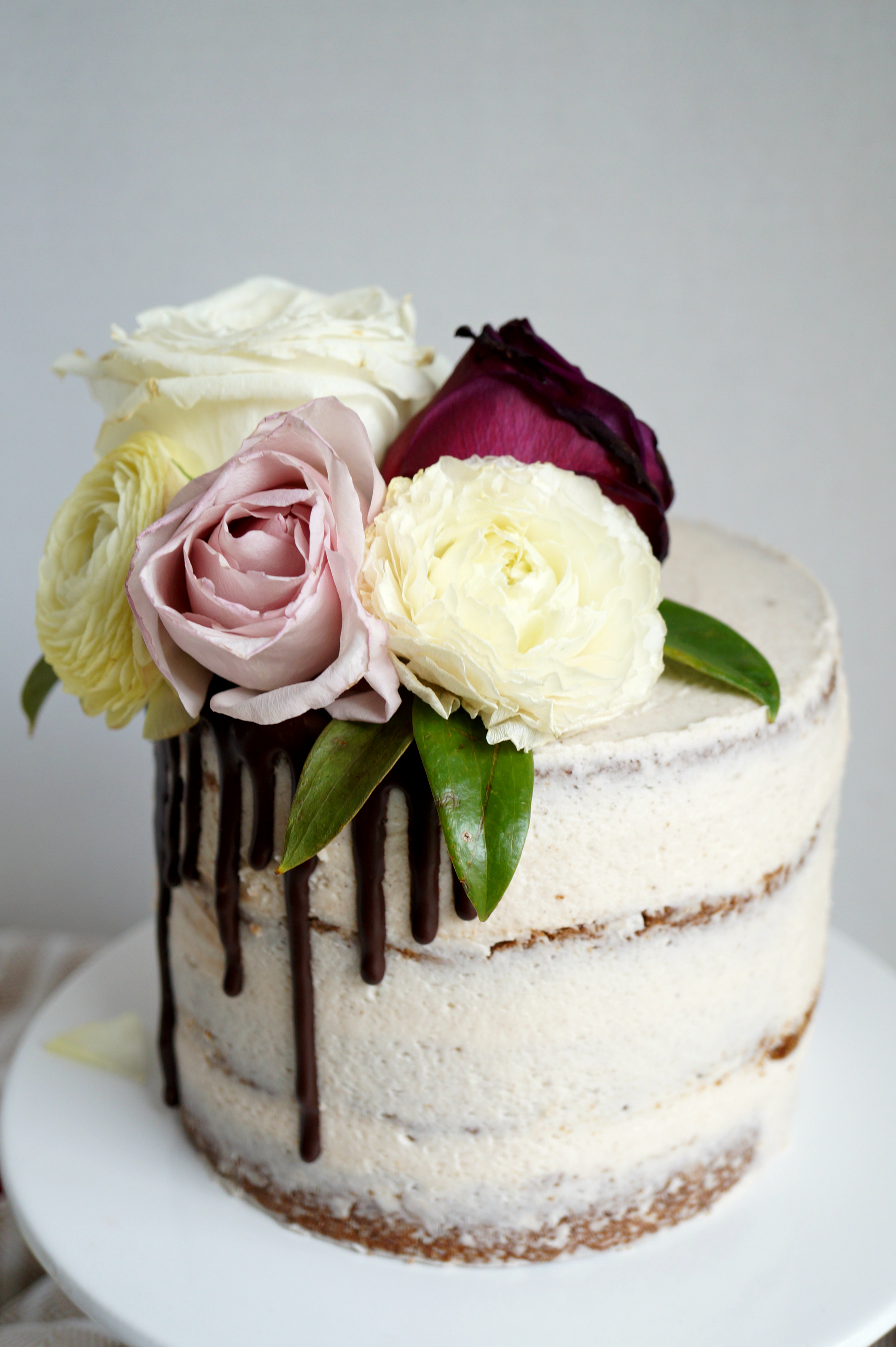 The reason I decided to decorate my little cinnamon swirl cake like this is because it looks just like what Jenny did with our cake! And the flowers on top are from centerpieces from our actual wedding. I actually made this cake and took photos about a week after the wedding before they totally bit the dust. I just thought it would be a cute touch to incorporate them! 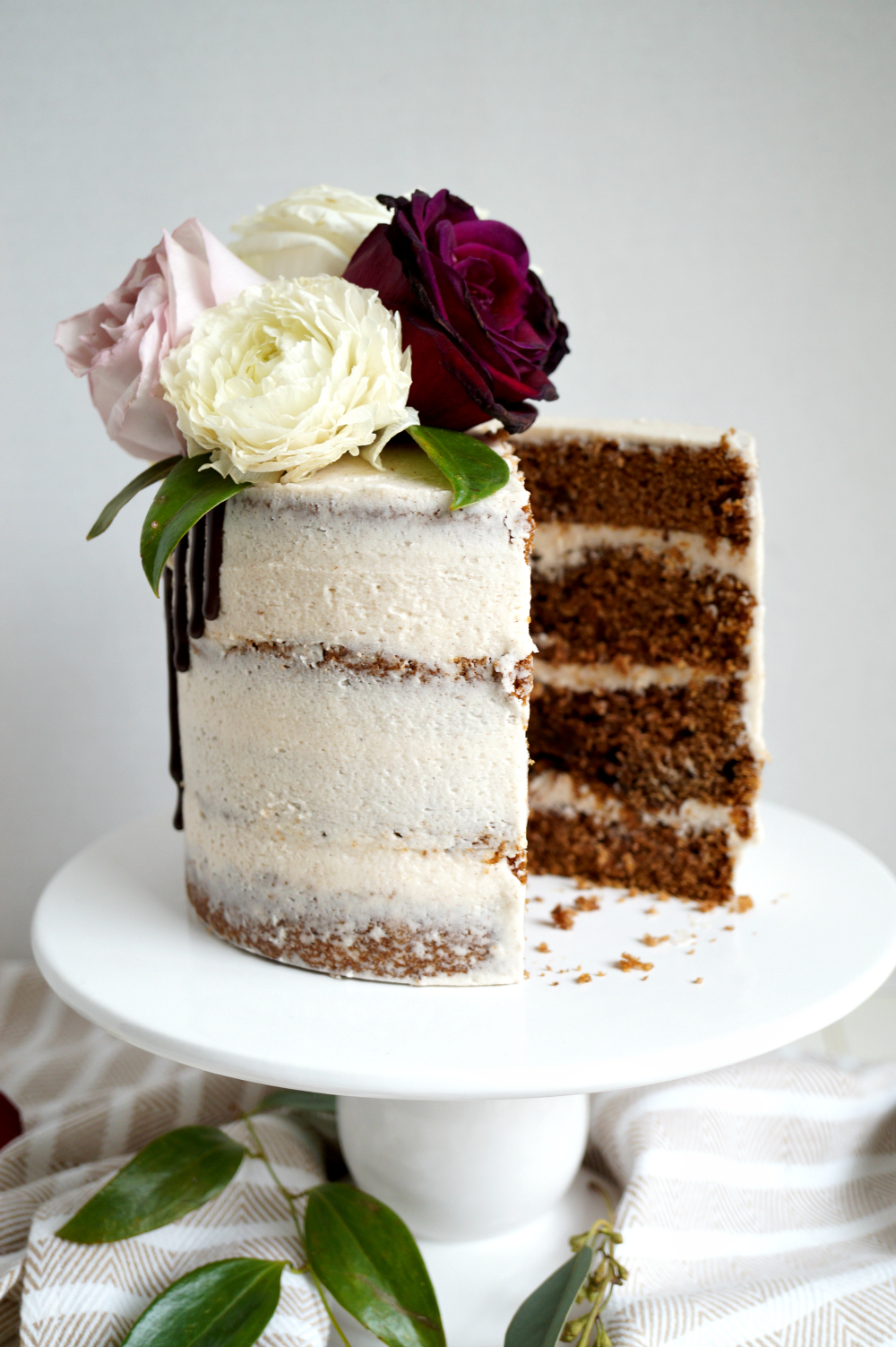 I'm sure you think this cake is all good and dandy, but the real question is - what did my ACTUAL wedding cake look like?! Well, I'm very happy to report that I got my stunning wedding photos back from Jennefer Wilson so I can share! 🙂 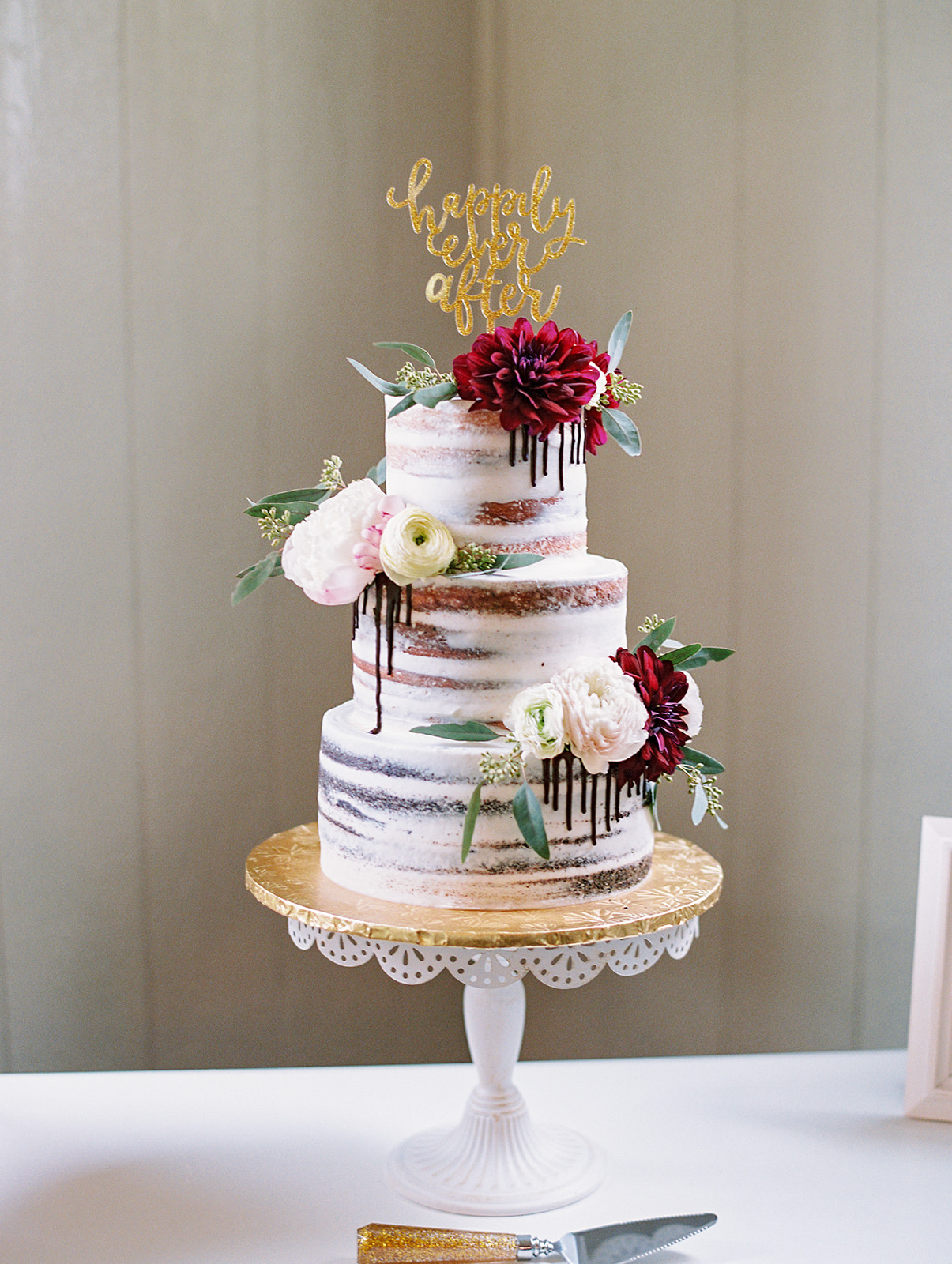 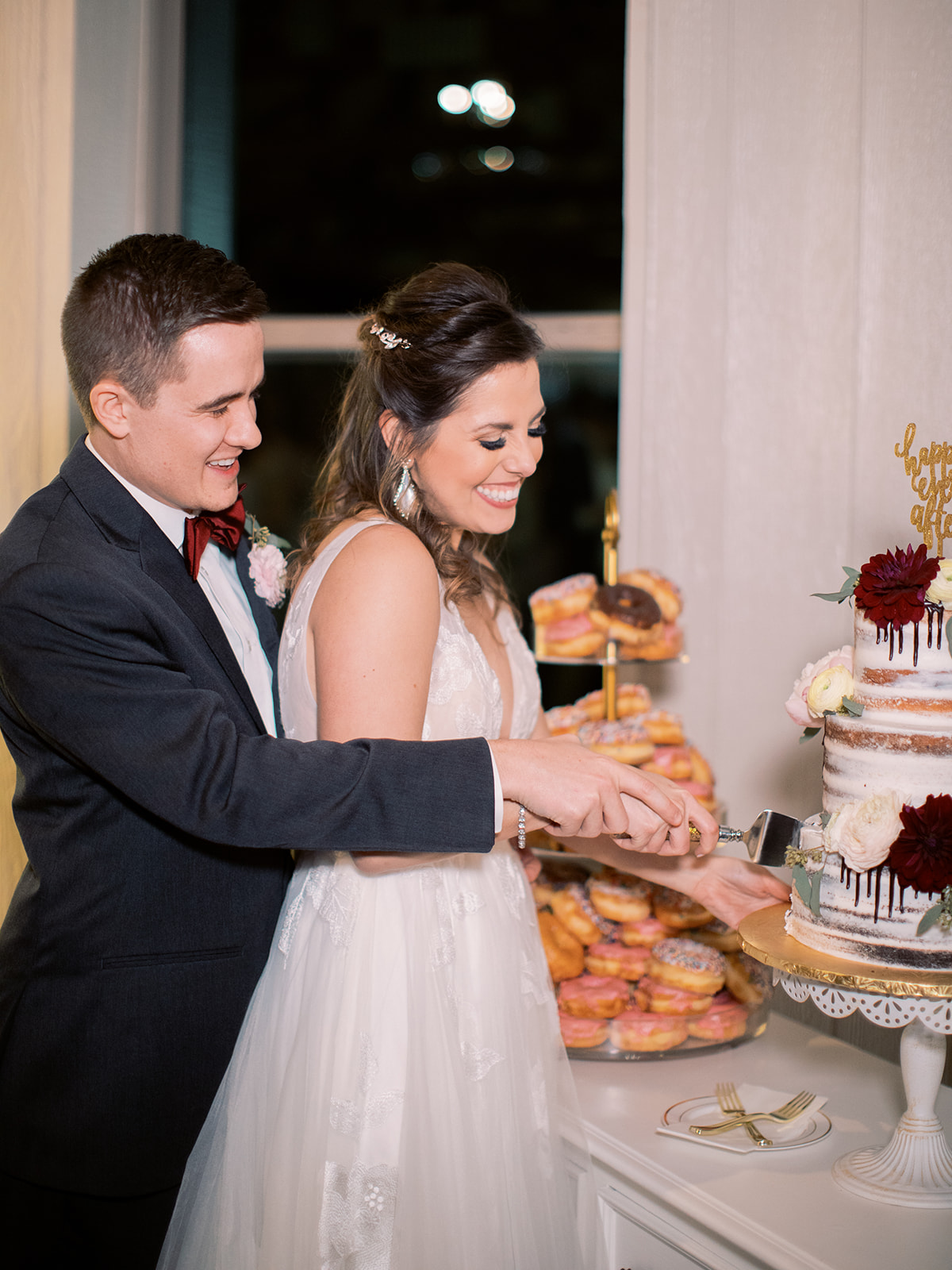 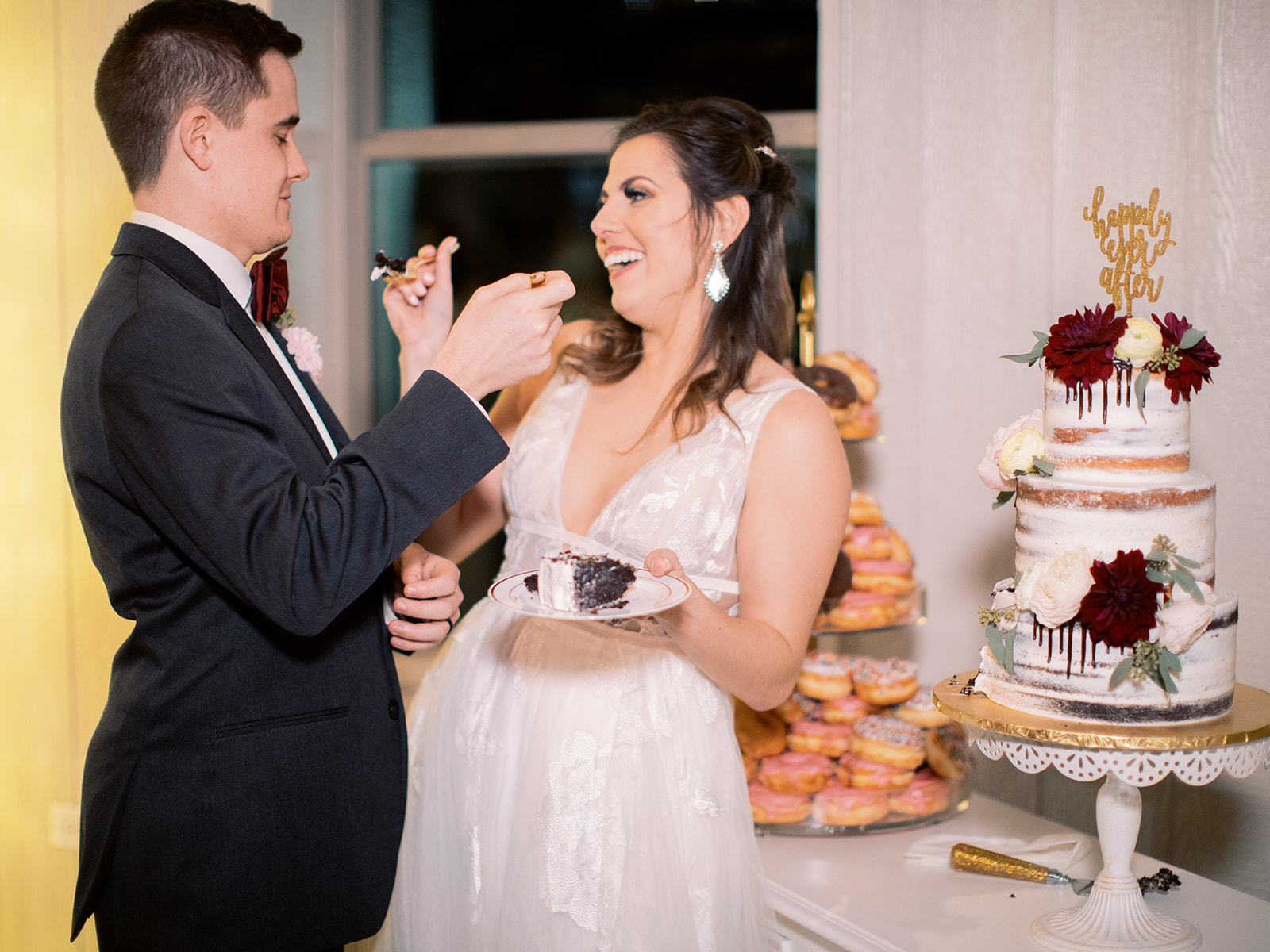 Oh hi, that's me!! And yes, you're seeing it correctly - we DID have a tower of donuts at the wedding in addition to the cake ???? Those were also from Jenny Layne and they were such a fun touch! Very on brand for me, I would say. LOL. 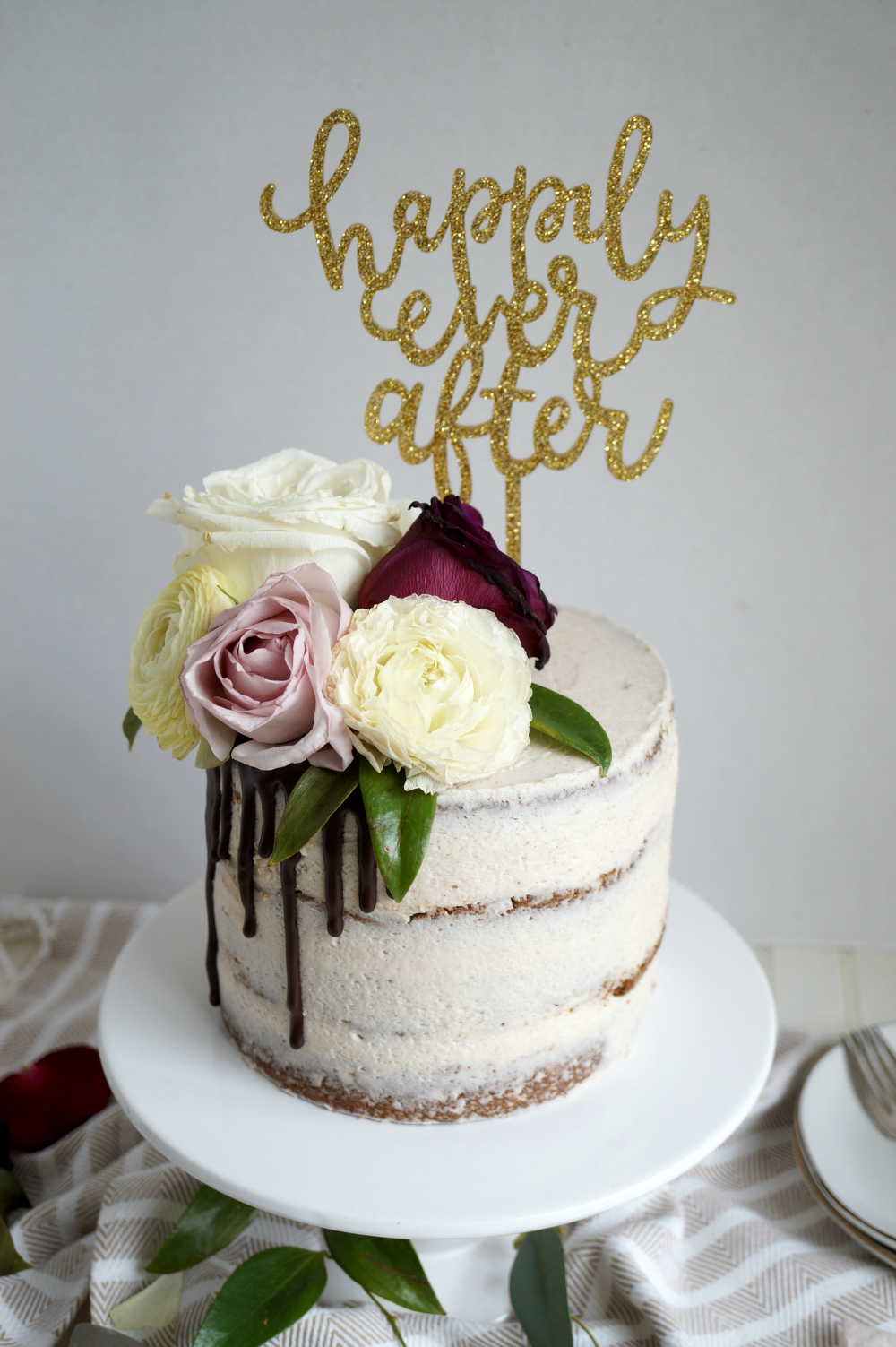 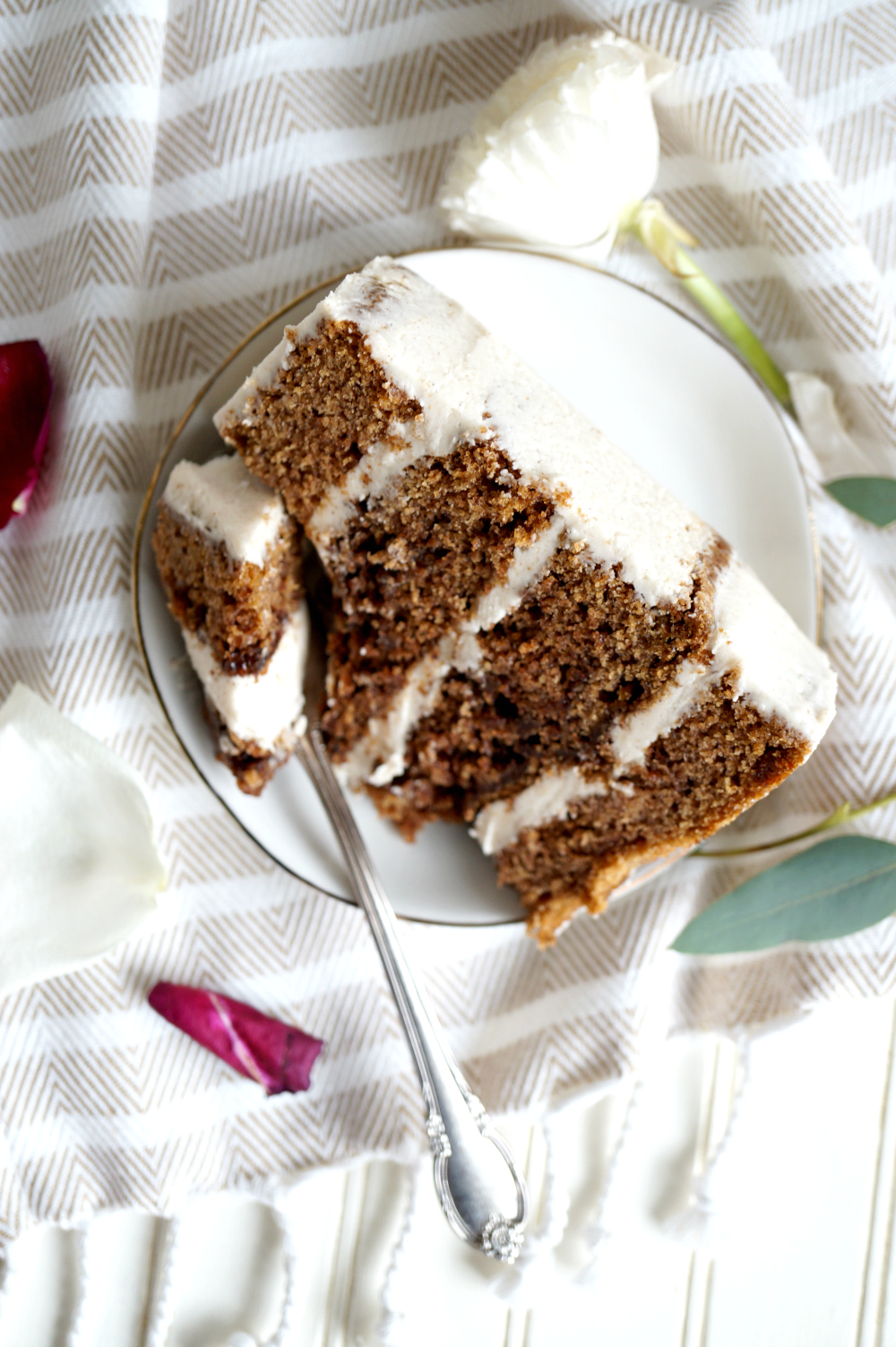 I hope you guys love this cinnamon swirl cake as much as I do! It's packed with warm cinnamon flavors, and the brown sugar-cinnamon swirl on top creates the most irresistible crunchy crust. YUM. It pairs perfectly with the barely-cinnamon vegan buttercream! I am totally obsessed!!! 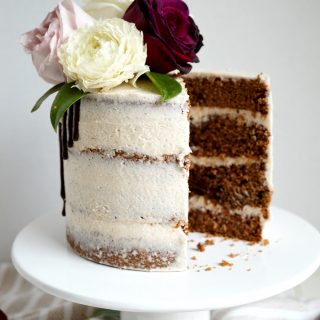