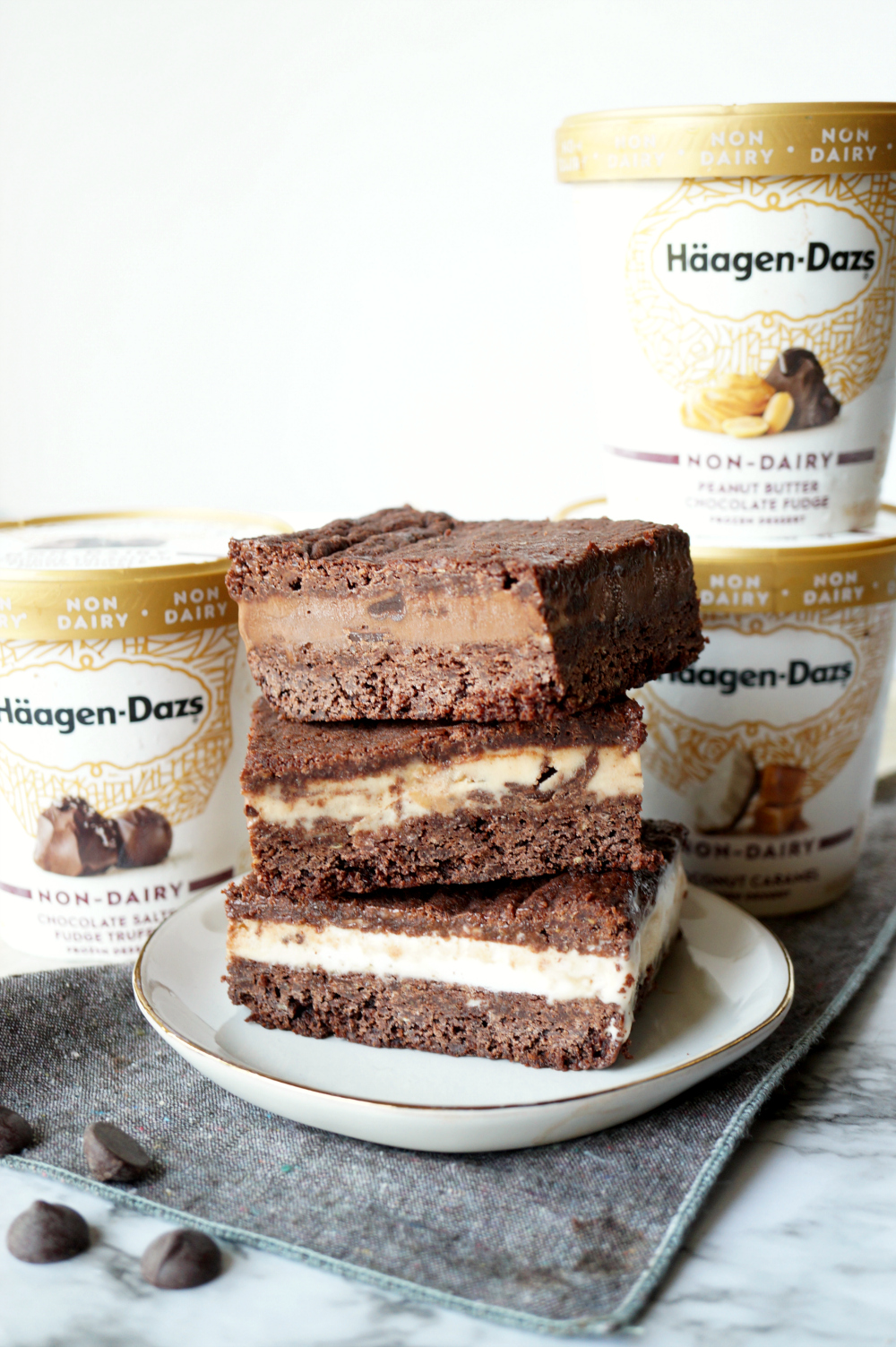 Hello friends! I am so excited to be pairing up with Häagen-Dazs® today to showcase their new Non-Dairy ice cream. These are absolutely fabulous on their own, but even better when turned into Vegan Brownie Ice Cream Sandwiches! Imagine chewy, fudgy vegan brownies stuffed with 3 different kinds of creamy, dreamy non-dairy ice cream for the quintessential summer dessert. I can promise that you definitely won't miss the dairy in these! 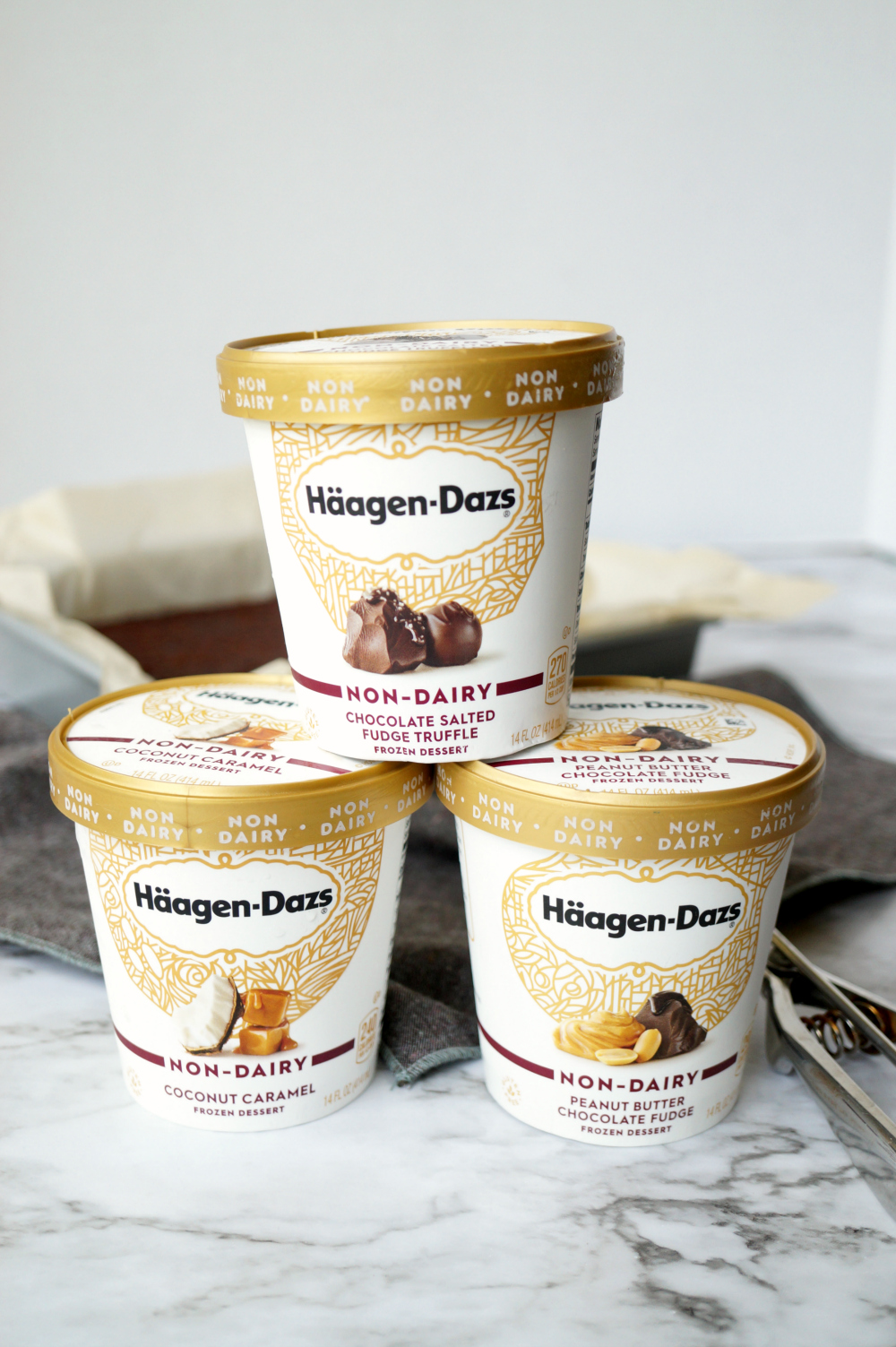 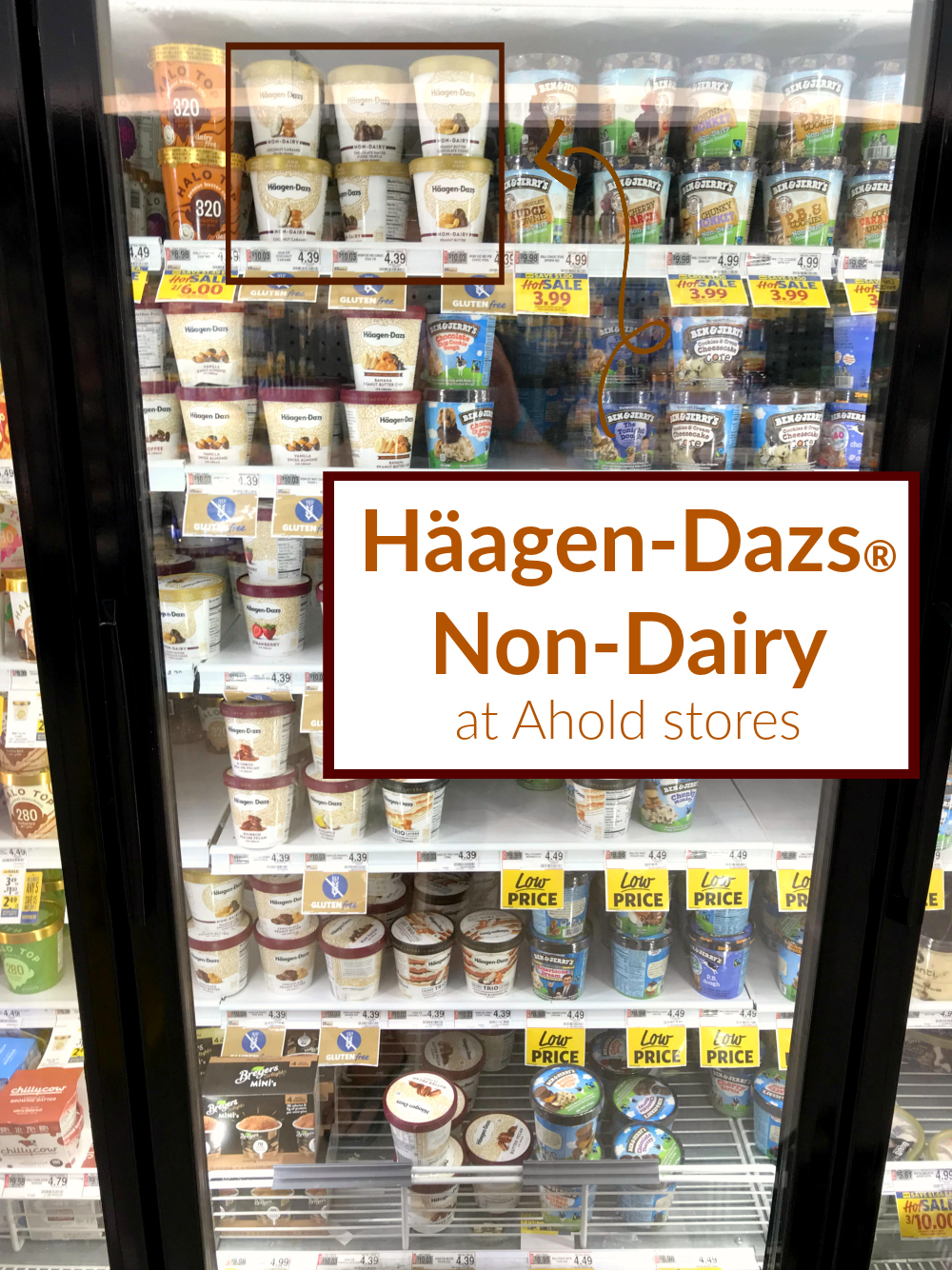 I have tried a lot of non-dairy ice creams in my day, especially since starting my #NoMeat2018 resolution and constantly moving towards a more vegan, plant-based diet! I can tell you that these Haagen-Dazs non-dairy varieties taste just like normal ice cream and are probably the best vegan replacement I've tried. If I hadn't read the label myself, I wouldn't have suspected a single thing. They don't have the overpowering soy/cashew/coconut {insert dairy replacement here} taste that most other vegan ice cream has, and instead, all you taste is the pure, rich flavor of chocolate, peanut butter, or caramel. This is because their approach to non-dairy is to use simple, pure ingredients and focus the flavors FIRST, rather than the dairy-free base! If you're looking for a non-dairy indulgence... I highly recommend this one. 😉 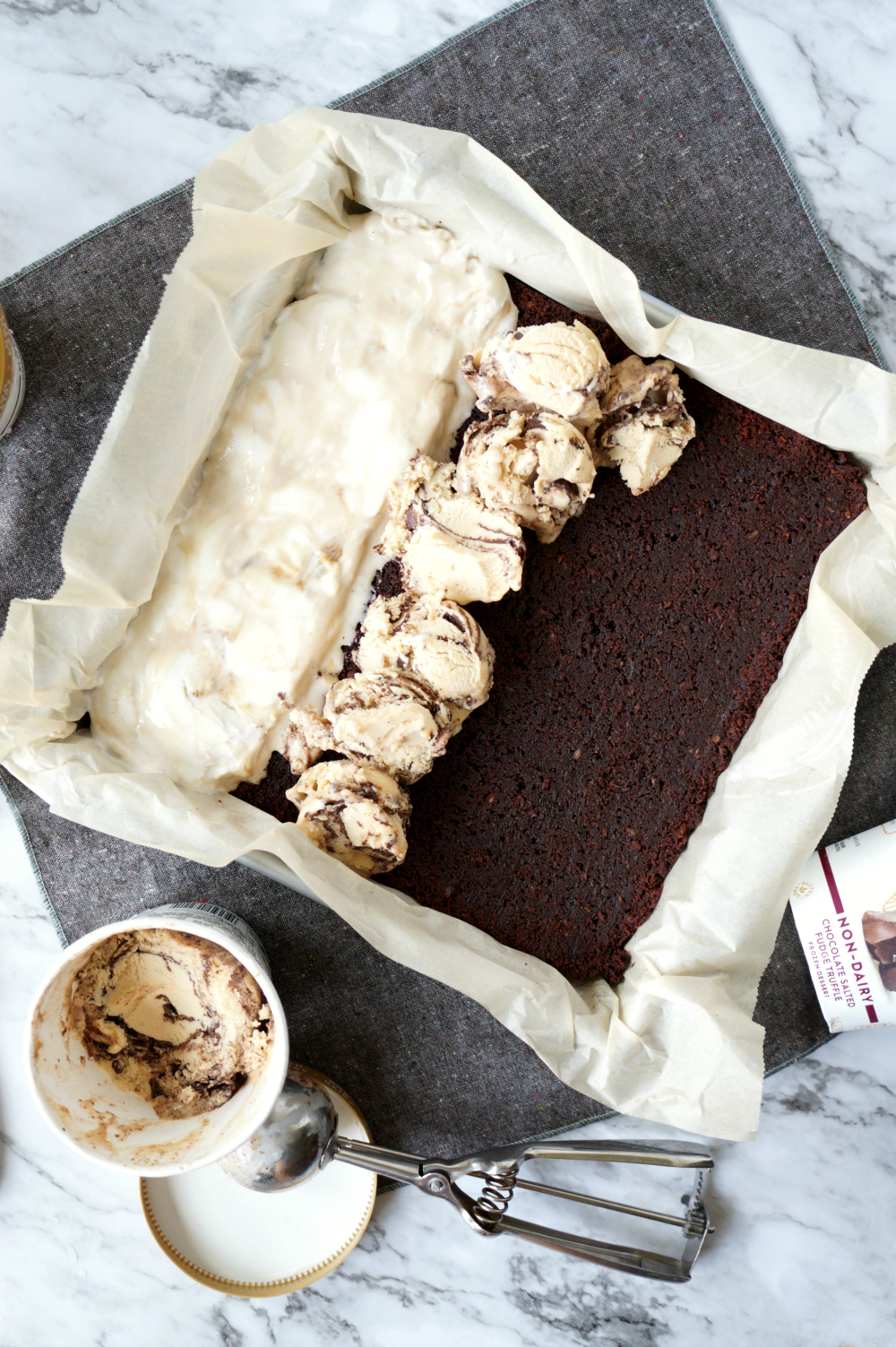 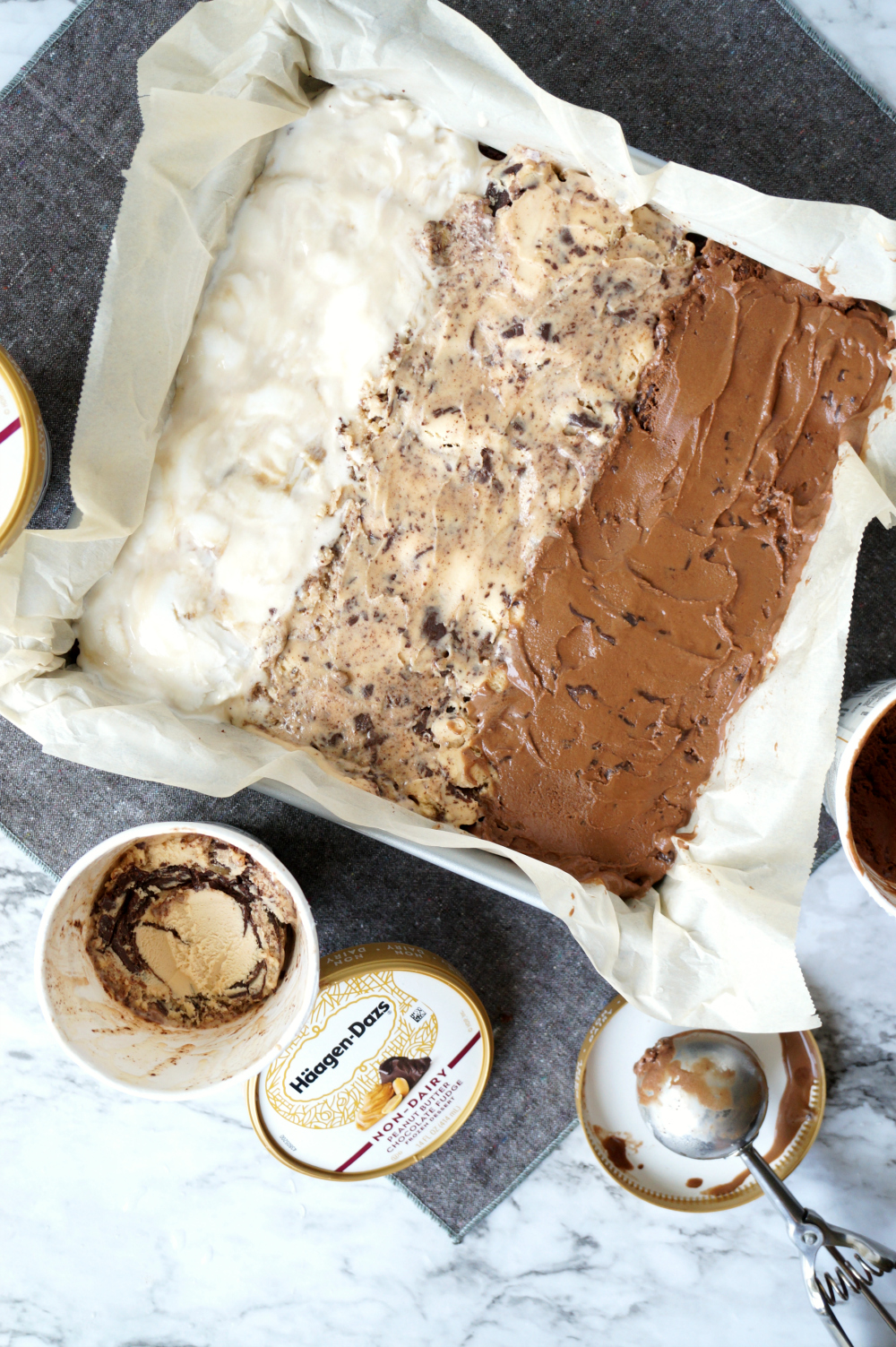 Believe it or not, making these vegan brownie ice cream sandwiches is much easier than you'd think! You start by making a big brownie and then cutting it in half. Next, spread your desired ice cream flavor inside! I decided to try the Chocolate Salted Fudge Truffle Non-Dairy, Coconut Caramel Non-Dairy, and Peanut Butter Chocolate Fudge Non-Dairy. Why limit yourself to one kind of ice cream sandwich when you can have THREE! The next step is to place the top of the brownie on top of your ice cream, and place the whole thing in the freezer to chill until solid. Finally, cut your ice cream sandwiches into portions and you are ready to dig in. I cut mine into 12 (so 4 sandwiches per flavor) and honestly they were still huge portions! You could easily get away with cutting them smaller for more servings. 🙂 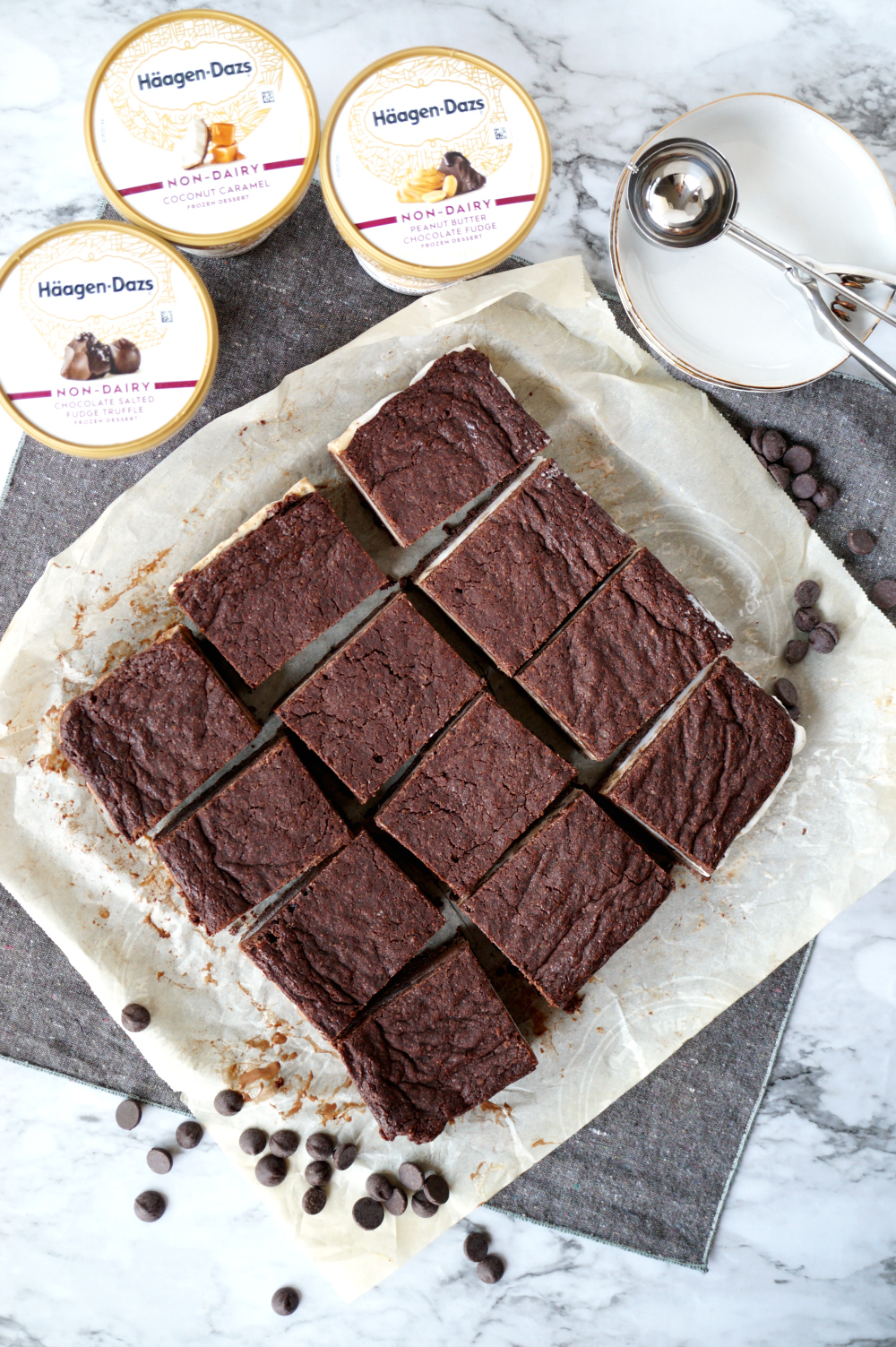 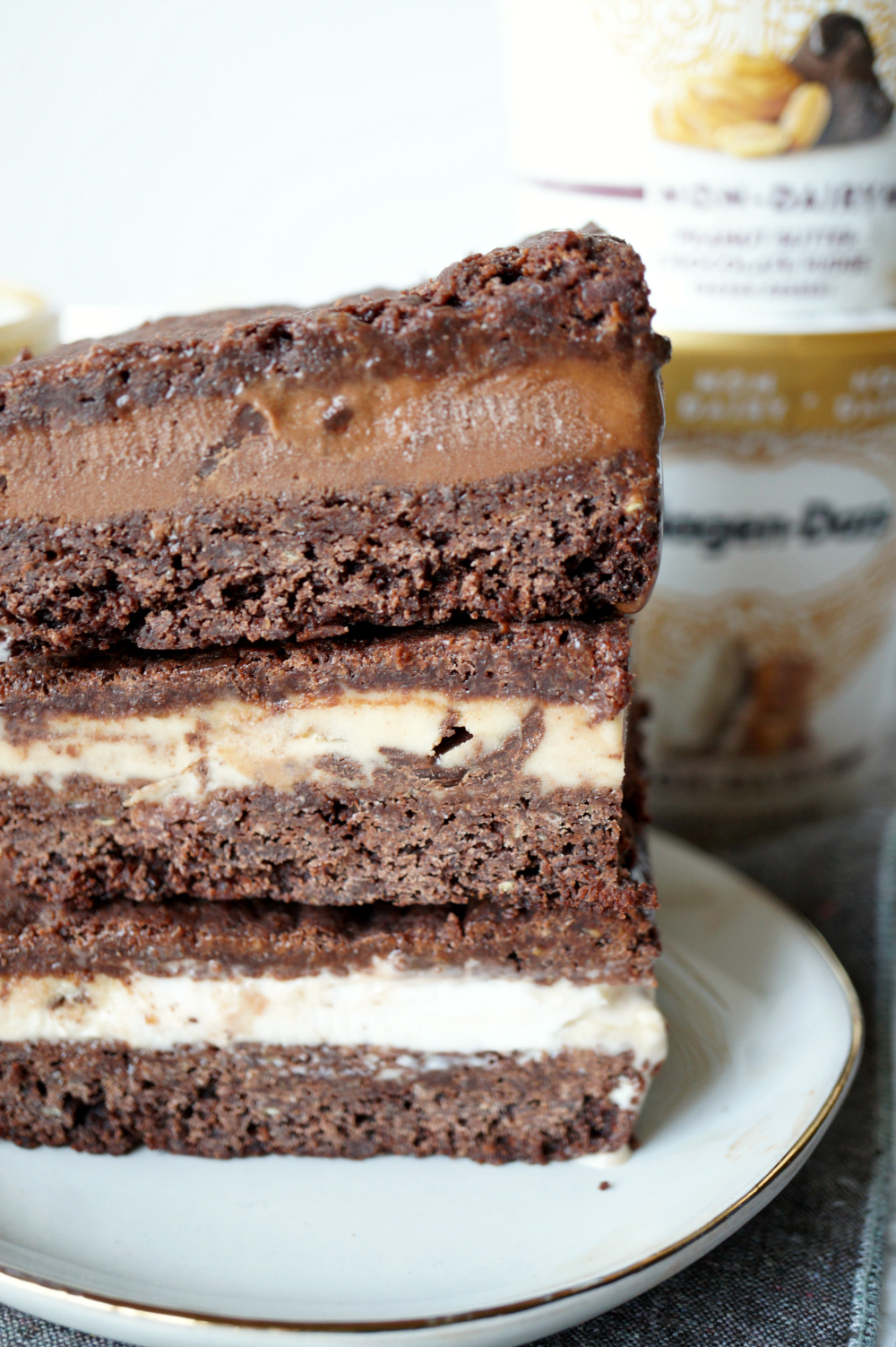 If you would like to try these new Haagen-Dazs non-dairy varieties for yourself (and I know you do!), look for them at your local Ahold grocery store, such as Stop & Shop! I found them at Food Lion, but you can double check the store locator to see if they have them near you 🙂 If you shop at Ahold, be sure to load this coupon to your card for $0.75 off! 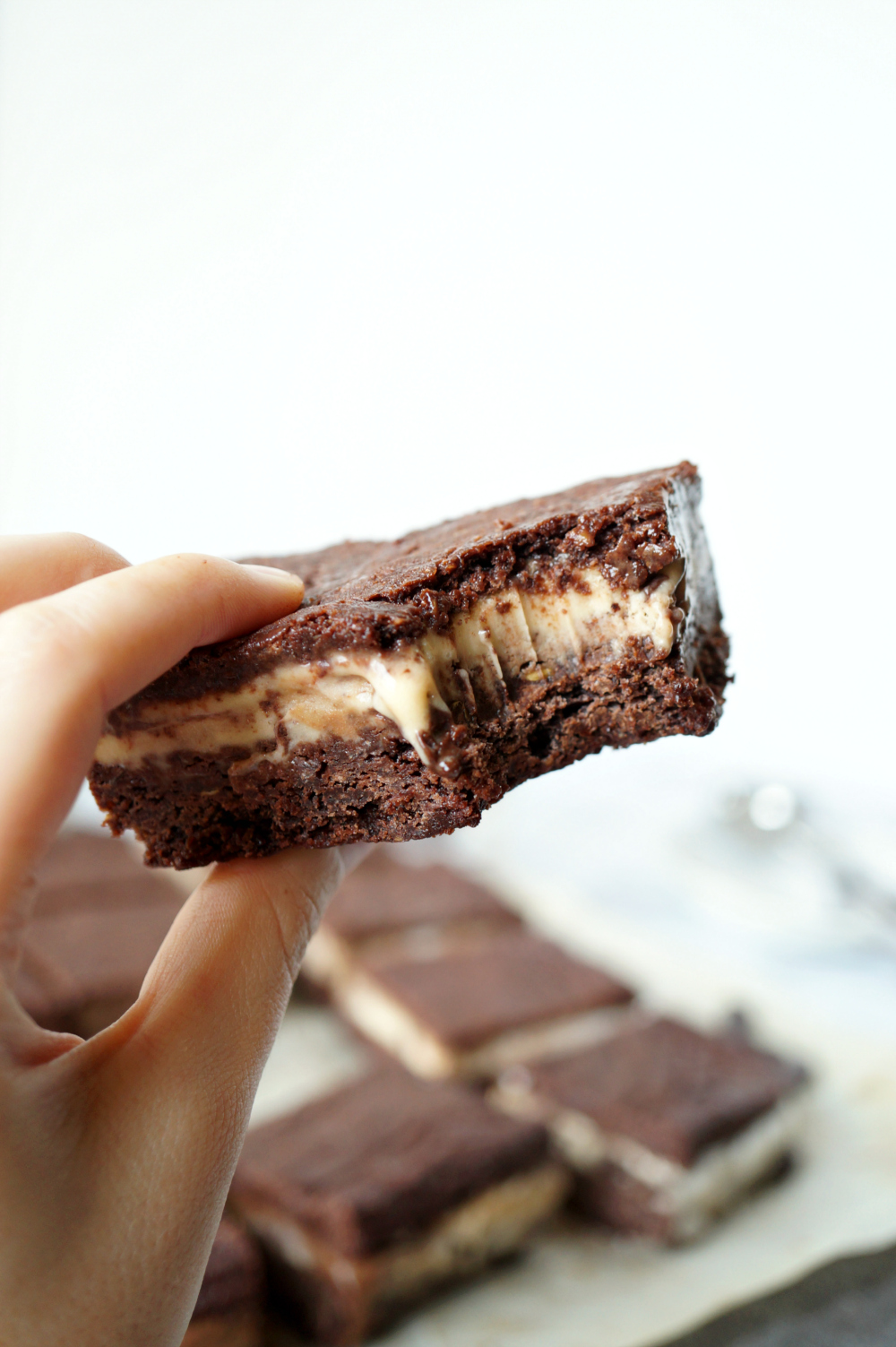 I hope you'll try making these delicious vegan brownie ice cream sandwiches this summer! They are so perfect to have stashed in the freezer for when you just need a small indulgence at the end of the day. I'm a peanut butter gal so my absolute favorite was the brownie bar with Peanut Butter Chocolate Fudge Non-Dairy ice cream, but I'm curious to see which one you guys love the most! 🙂

If you're wanting more non-dairy ice cream inspiration, be sure to check out the Haagen-Dazs website to see all their varieties! 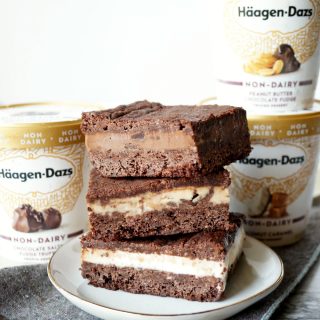