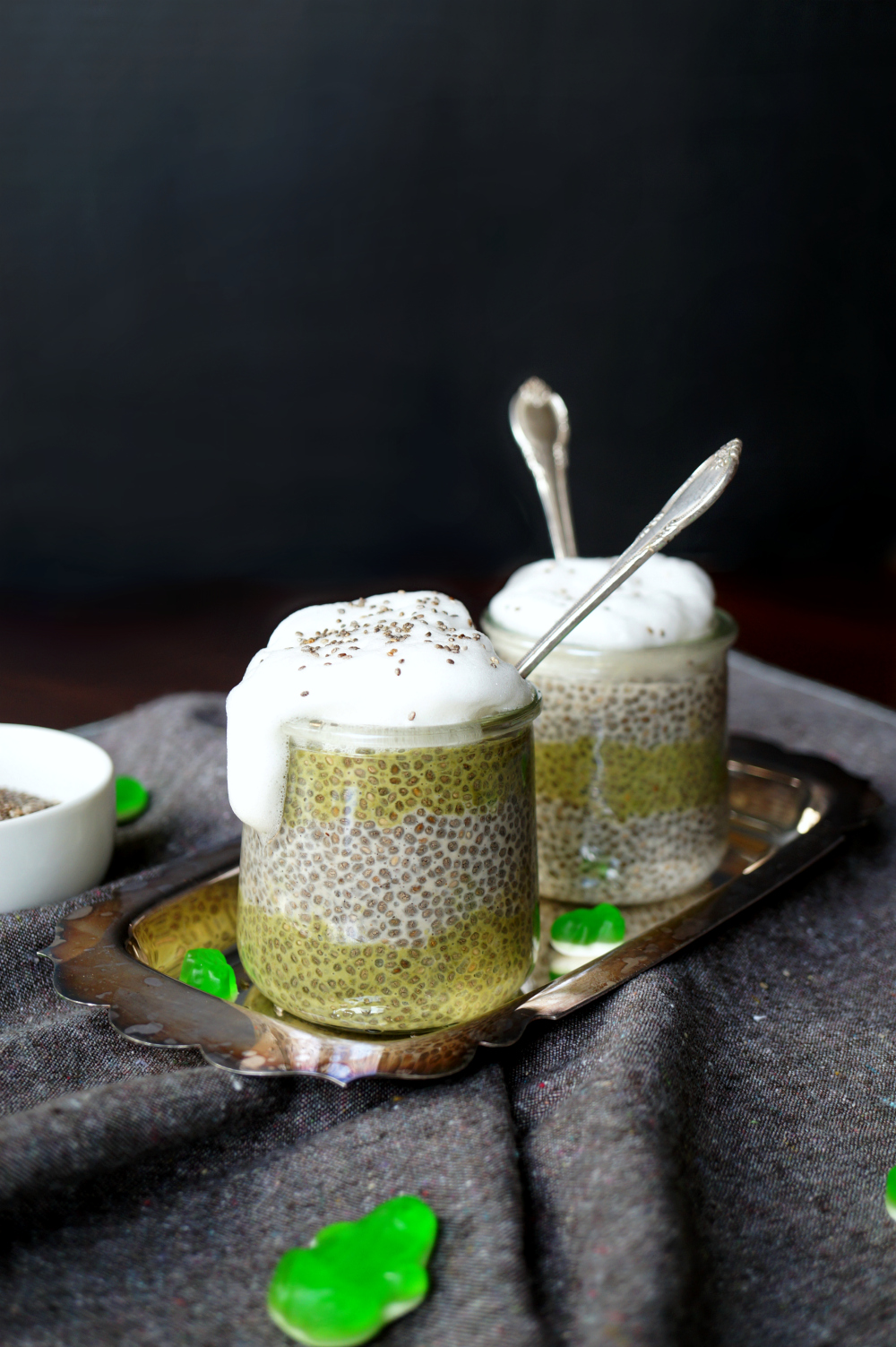 Happy Saturday, friends! I bet you thought that after all the spooky goodies I shared for #HalloweenTreatsWeek, I was done. But... you were wrong! I decided to squeeze in just one more little silly, gross recipe for Halloween before the big day! I have paired up with a few bloggie friends for a #HalloweenBreakfast event, also known as #DeadAndBreakfast. HA. Once I saw the event name, I just had to join! My contribution today is this Frog Eggs Matcha Chia Pudding, which looks questionable but is TOTALLY edible. And delicious! 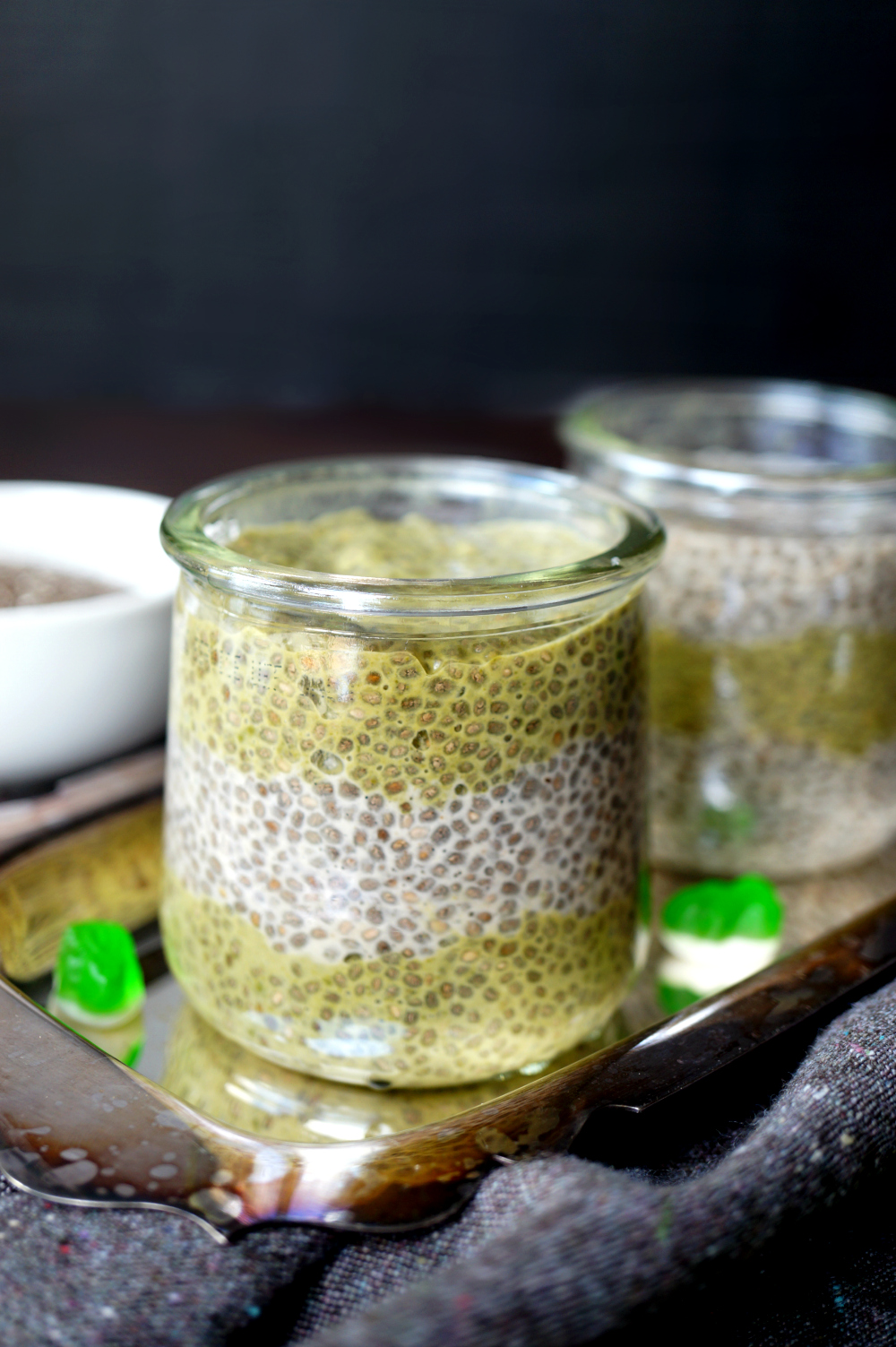 I personally am a BIG fan of chia pudding! It's so easy to make, no-bake, and perfect to prep ahead for a quick breakfast or snack. As a vegetarian-going-on-vegan, I also appreciate that it packs a serious Omega-3 punch! For this particular version, I whipped up a small batch of matcha chia pudding and another batch of vanilla bean chia pudding. Then I just layered them to create a fun striped effect. And that's it! If I were to make it for my normal meal prep, I would probably just make a big batch and call it a day 🙂 Just being honest! 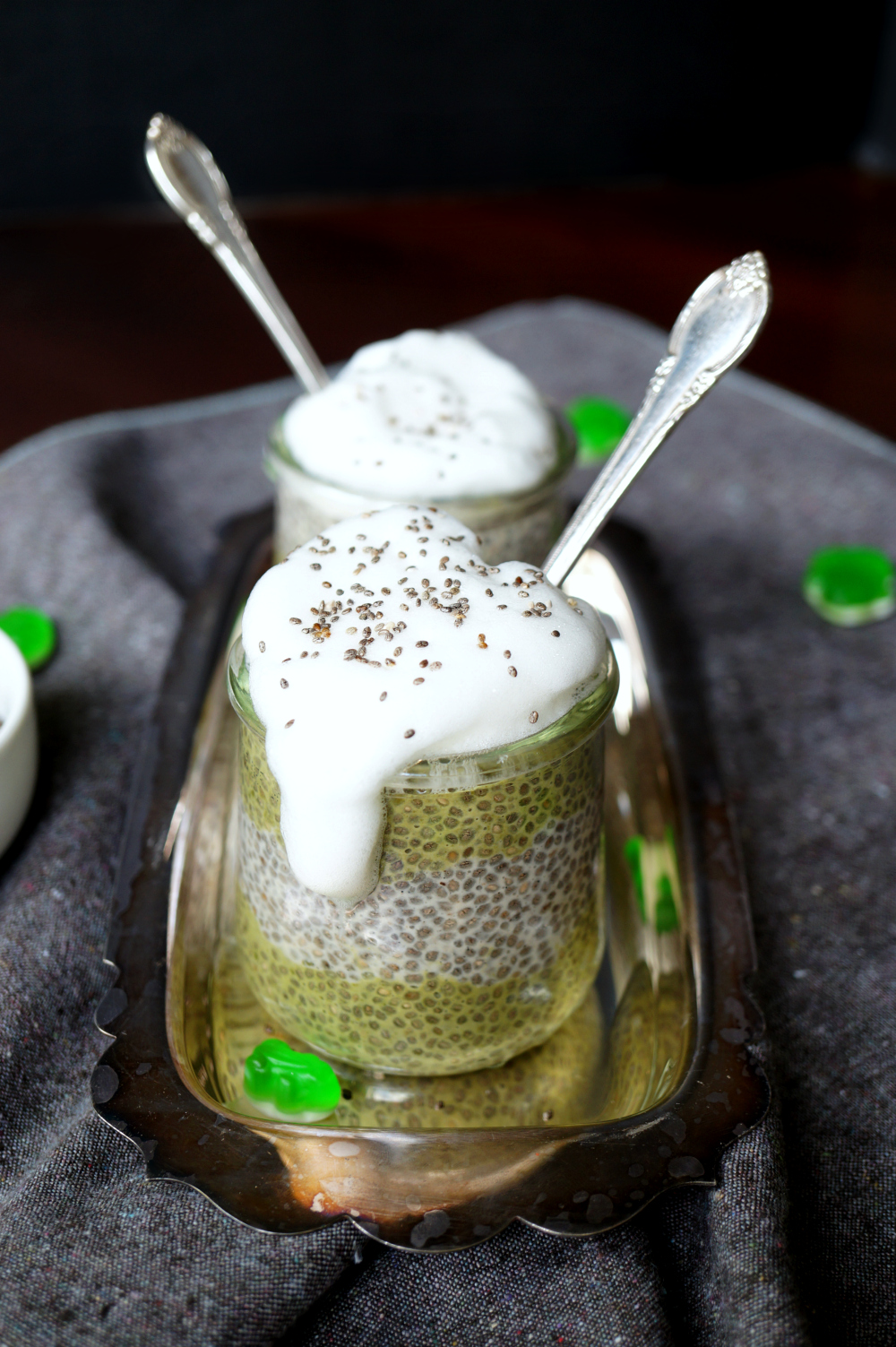 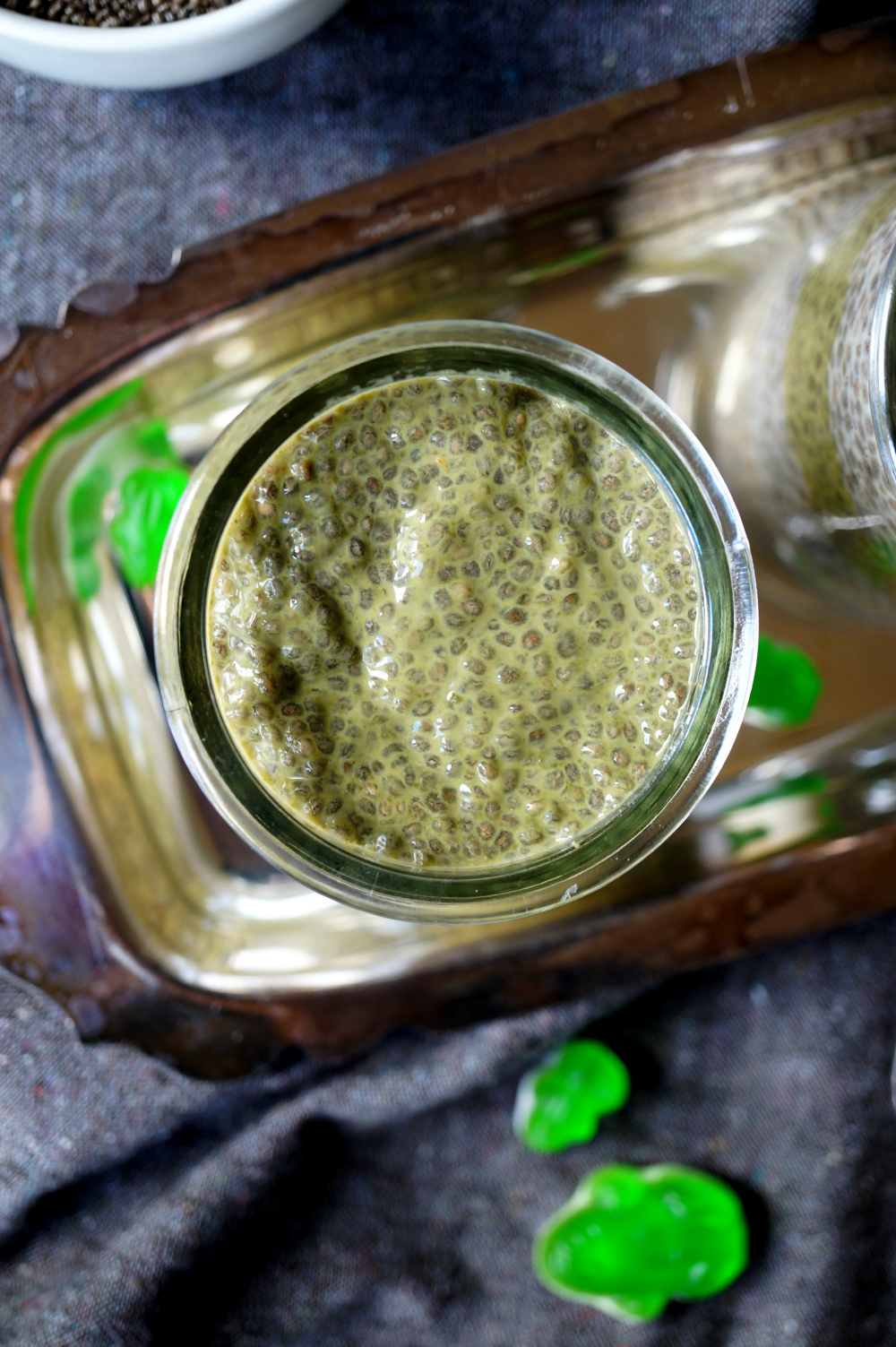 To make this matcha chia pudding extra Halloween-y, I decided to pretend it was FROG EGGS! Yuck! ? Can't you kinda see it though? The texture is already so funny and slimy, it really isn't much of a reach! To add to the effect, I also whipped up a super quick aquafaba foam for decoration. It's just the liquid from a can of chickpeas (aquafaba) and a little bit of powdered sugar to stabilize it. It's definitely edible, but it won't taste like much! I used it more as a prop. The finishing touch would have been some plastic frogs on the table but you will not believe how difficult it was to find ANY frogs anywhere! I looked at Walmart, Hobby Lobby, Target, etc. Nobody had any for Halloween and not even in the toy section. Major fail. So I settled for gummy candy frogs. Next best thing! 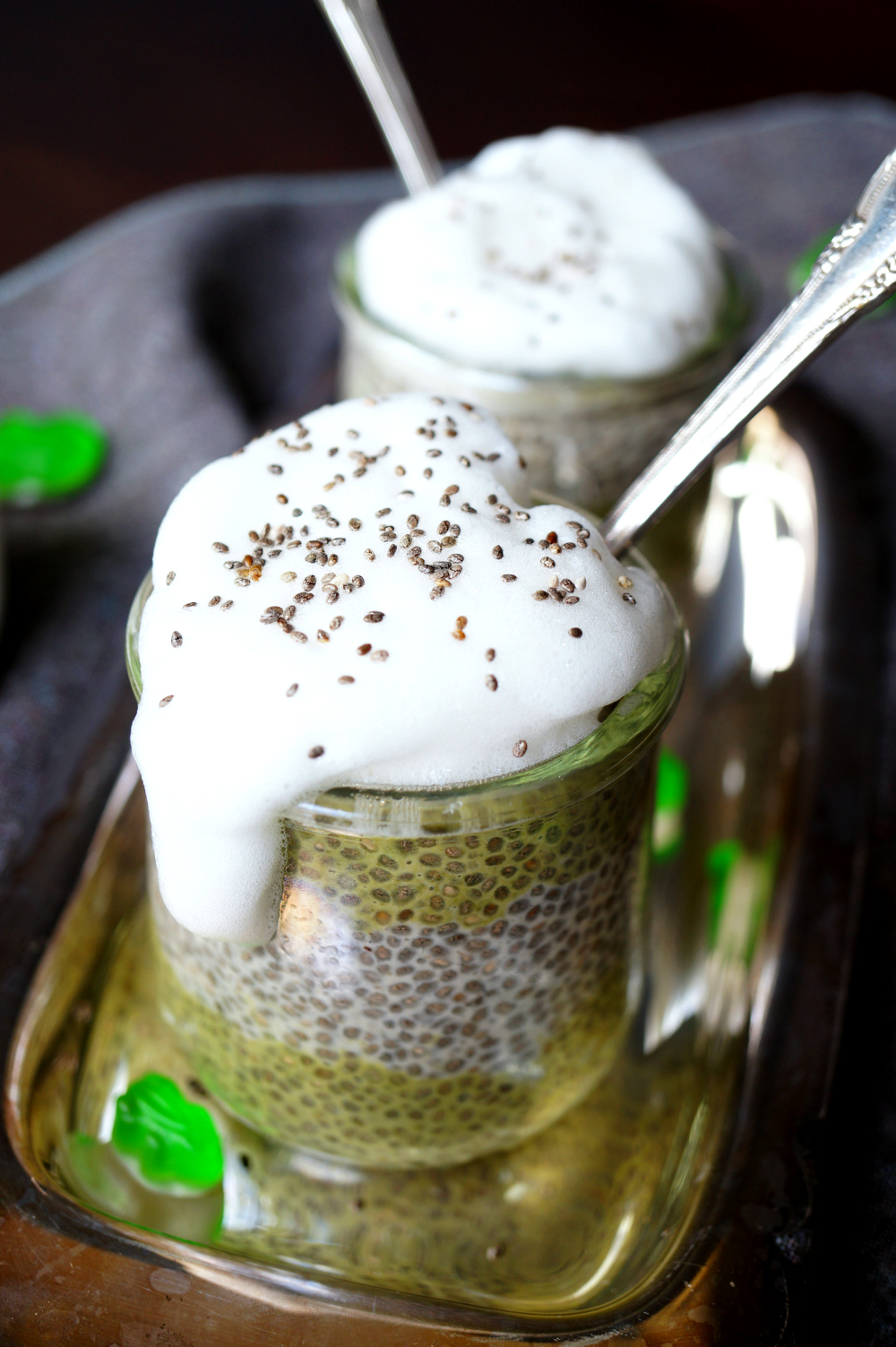 Since this fun #DeadAndBreakfast event was a group effort, don't forget to check out everyone else's festive and spooky creations!

Be Brave and Join Us for Breakfast & Brunch 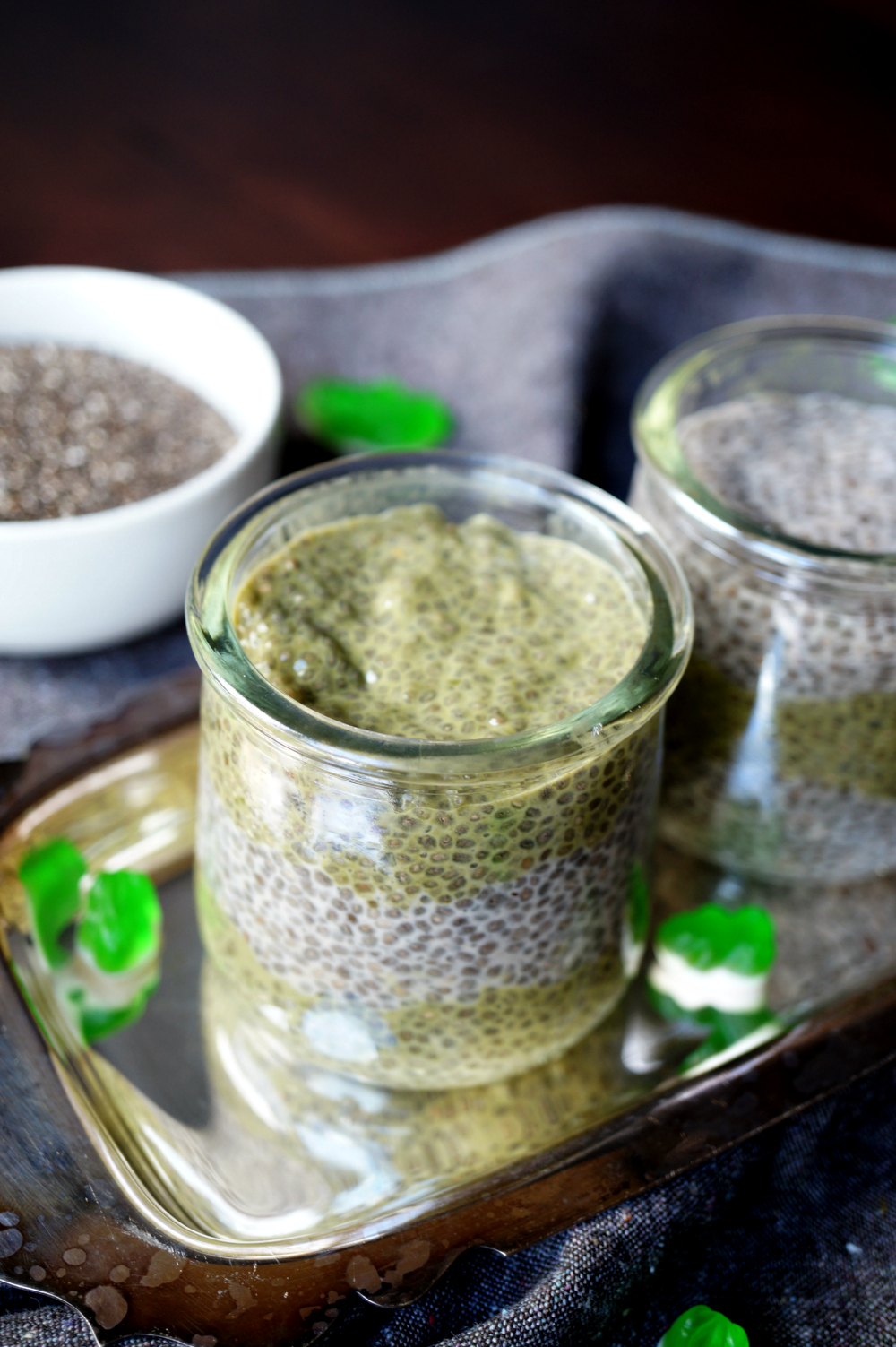 I hope you guys will give this ~spooky~ Frog Eggs Matcha Chia Pudding a try! Make it for Halloween or just make it for your fall meal prep. It makes the best healthy breakfast!