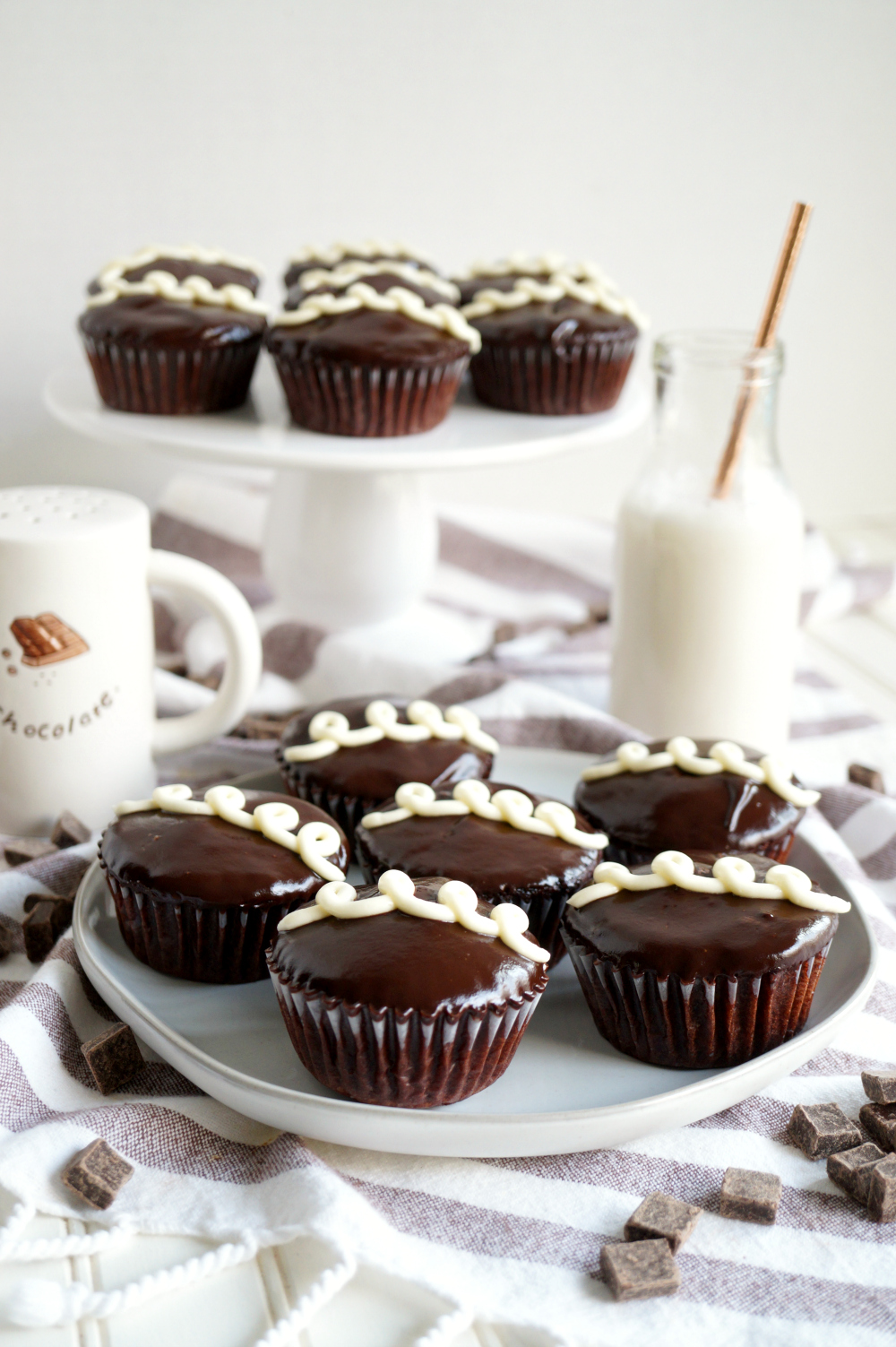 Hiii friends! Happy Thursday! I am so so excited to be sharing this amazing recipe with you today. It was high time that I had another installment of #ThrowbackTreats (and on a Thursday, no less). After the success of my Vegan Cosmic Brownies and Vegan Oatmeal Creme Pies, I give you… Vegan Copycat Hostess Cupcakes! Oh lawdy, these are SO GOOD y’all! Soft chocolate cake, creamy vanilla filling, and a decadent layer of melted chocolate on top. And these just had to be finished off with the signature swirly on top, of course 🙂 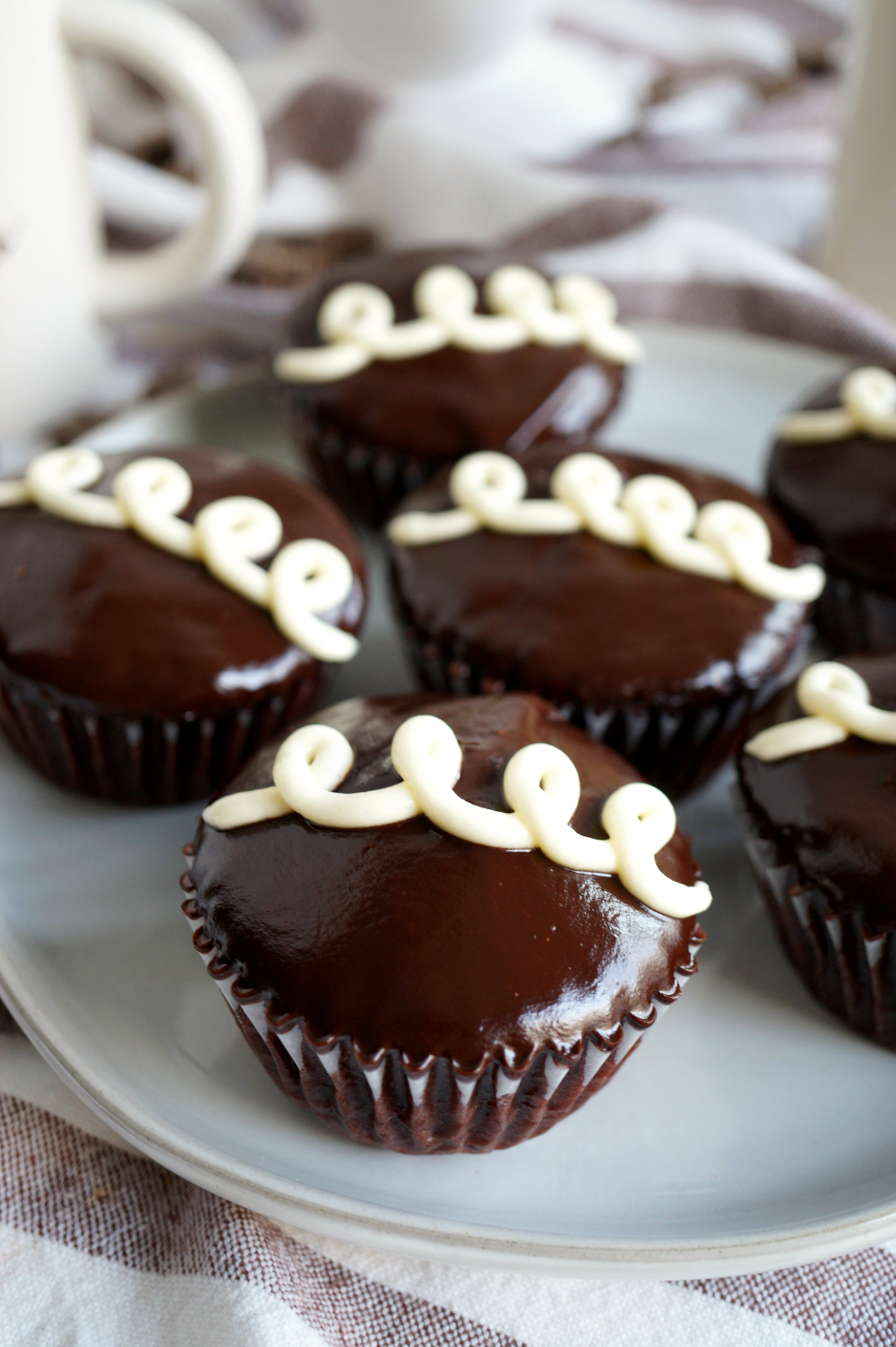 I really have been having so much fun with this #ThrowbackTreats series, especially in the middle of the summertime slump! Inspiration to cook and bake is so hard to come by at this time of year with the HEAT! Gah. So going to the grocery store and perusing the boxed treats has been a great way to get my little baker brain going. I can’t say I had the original Hostess cupcakes many times as a child, but the signature white icing on top is unmistakeable! I’ll hazard a guess that my version tastes much better than the real thing. And it’s vegan, which is the best bonus!! 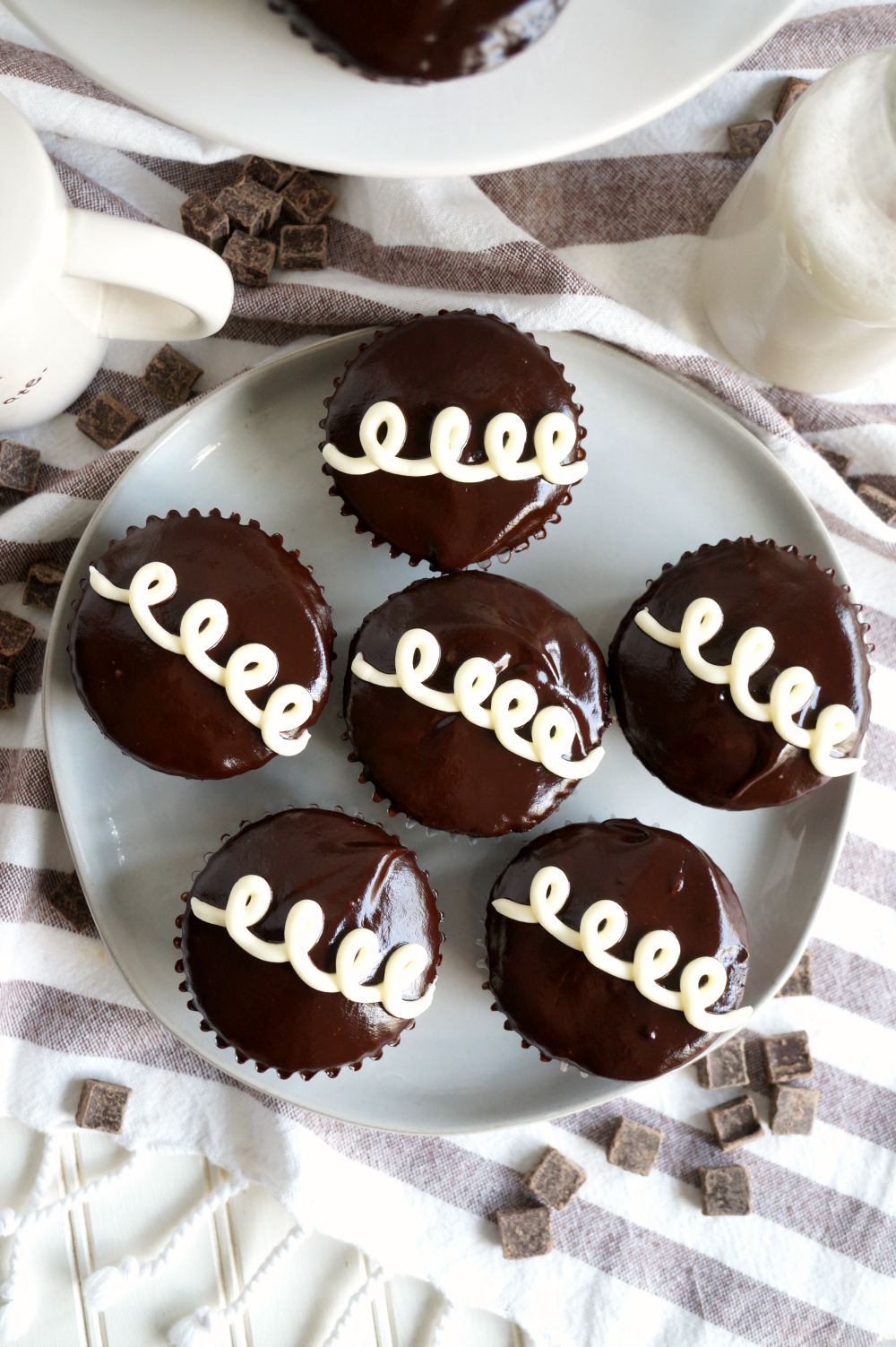 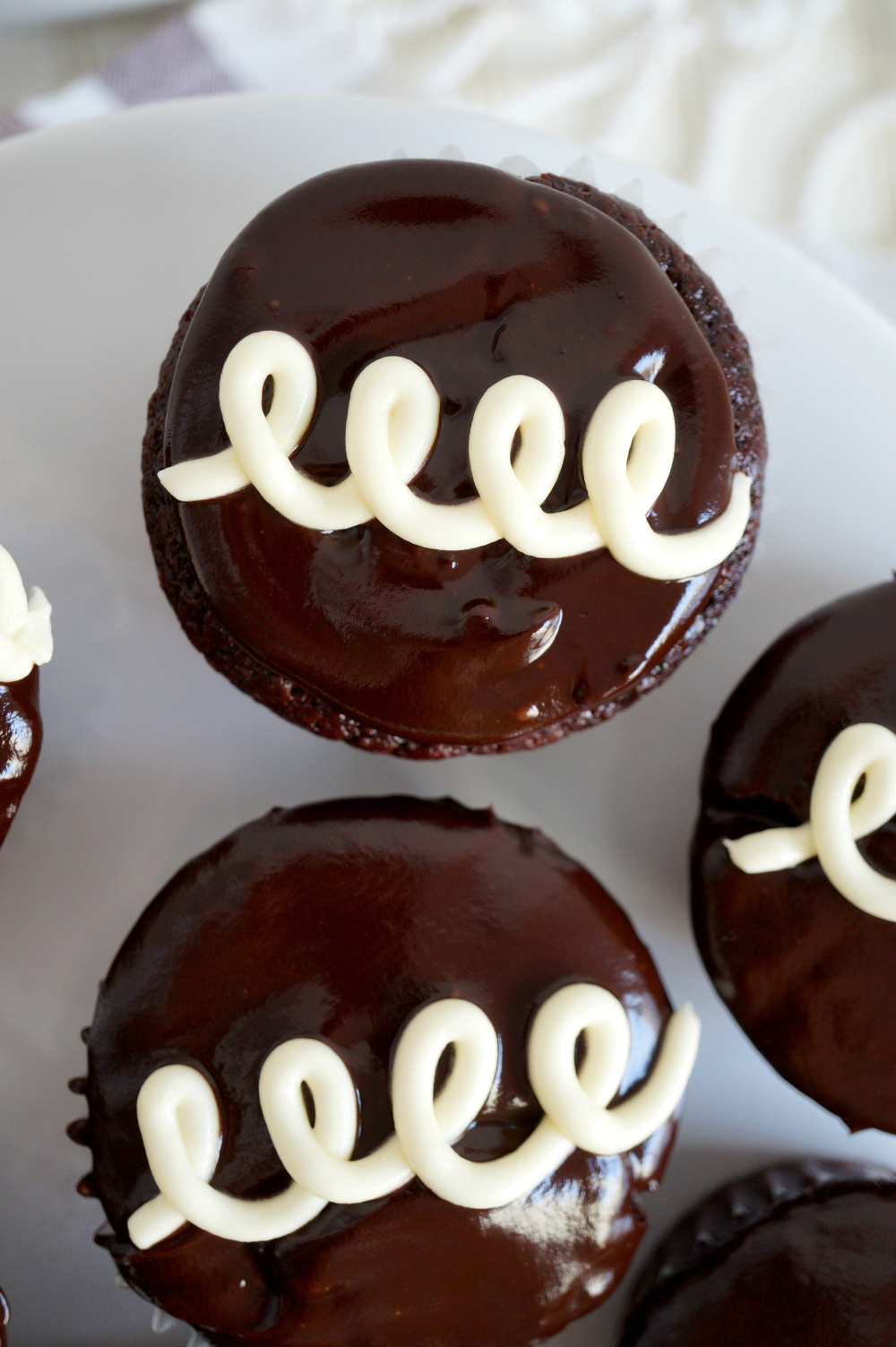 Would you believe me if I told you that these copycat Hostess cupcakes are truly not hard to make?! Because it’s true! First you make the chocolate cupcakes, which just happen to be one-bowl (bonus!). Then you whip up the vanilla frosting. Stuff your cupcakes with the frosting, and then cover the top with chocolate! I made my ganache in a small bowl and dunked the tops directly into it, but you can also just spoon the chocolate on top of your cupcakes and spread it around to make it all pretty. You can see one of the “spooned” cupcakes above. This is a great technique if your cupcake cracks from too much cream filling! The last thing is to make the swirly on top which is… still the same frosting you used for the filling. Easy peasy! 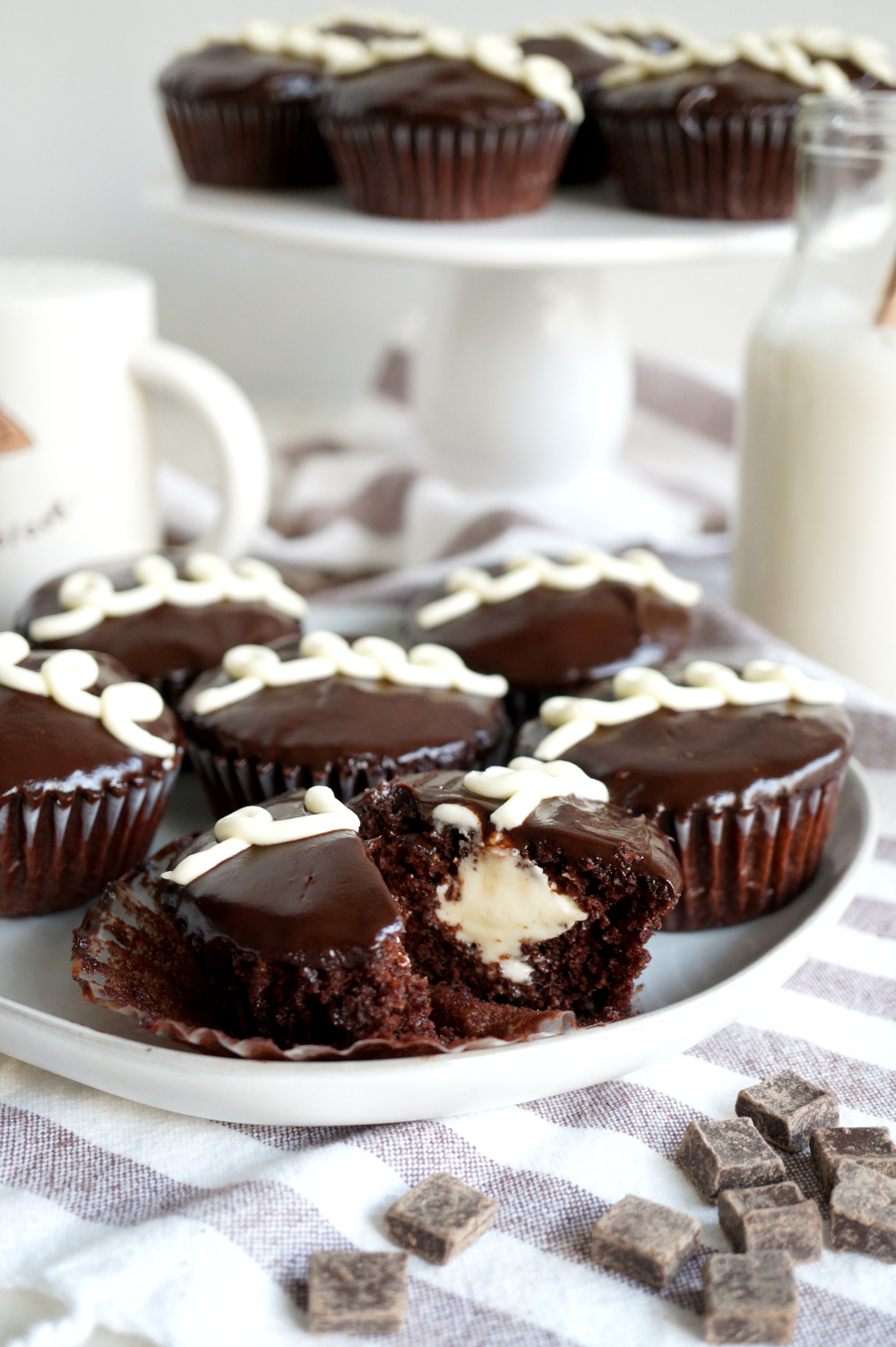 As far as FILLING the cupcakes go, you do have a couple of options. I own a filling tip, so that is what I use! It is long and skinny, so it’s perfect to stuff cupcakes and donuts without making a giant hole. It’s just a couple of dollars online (but you can also find it at Hobby Lobby, JoAnn’s, and other craft/baking stores). The other option is to scoop out the top, fill the cupcake, and place the top back on! You can use a small scoop (it looks like an ice cream scoop), or even a melon baller. They also sell “cupcake corers” made especially for this reason! Personally, I don’t super love the corer because I feel that it takes too much cake out. ???? But, moral of the story is you have lots of options! 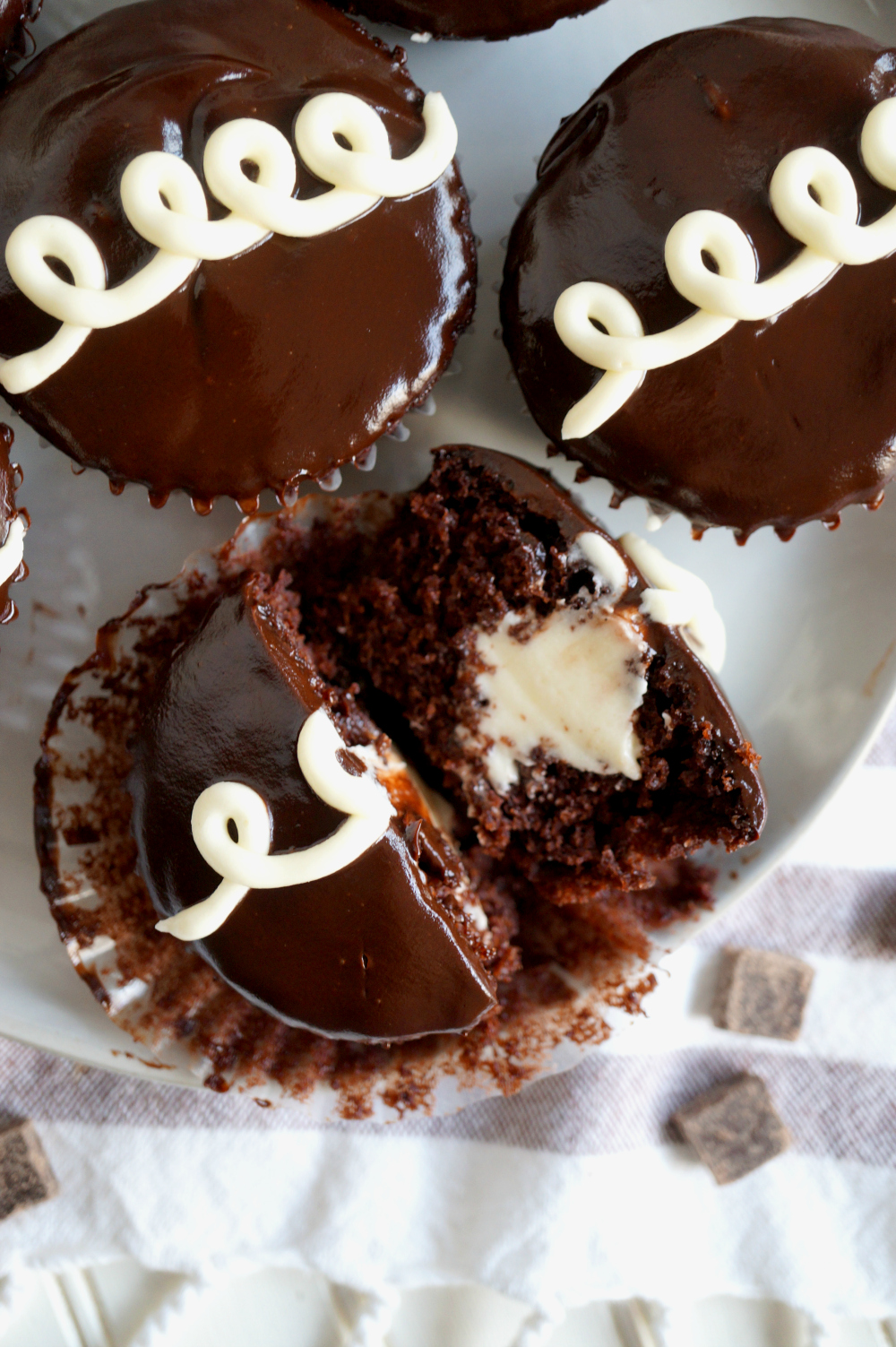 I hope you guys will give these copycat Hostess cupcakes (or ~Faux-stess) a try! They are seriously amazing! I brought the leftovers to work and they went SO fast. My co-worker actually asked me if I had really made them myself, because that’s how good they are!! Don’t sleep on this classic chocolate and vanilla combo… it’s a classic for a reason! 🙂

Check out my other homemade #ThrowbackTreats!

What should I make next?!

Save Print
Prep time
30 mins
Cook time
15 mins
Total time
45 mins
Missing the classic storebought Hostess Cupcakes? These Vegan Copycat Hostess Cupcakes (Faux-stess!) combine fluffy chocolate cupcakes with soft vanilla filling, chocolate topping, and the signature loopy decoration on top!
Author: Valentina | The Baking Fairy
Recipe type: Cupcakes
Serves: 18
Ingredients
Instructions
3.5.3251
*Disclosure: I am part of the Amazon Associates Program, and there may be affiliate links on this page. If you buy anything through my website, I will receive a small percentage of the profit at no extra cost to you. Thank you for supporting my blog!*
Previous Post: « vegan Veggie Supreme french bread pizza
Next Post: vegan peaches & cream layer cake »