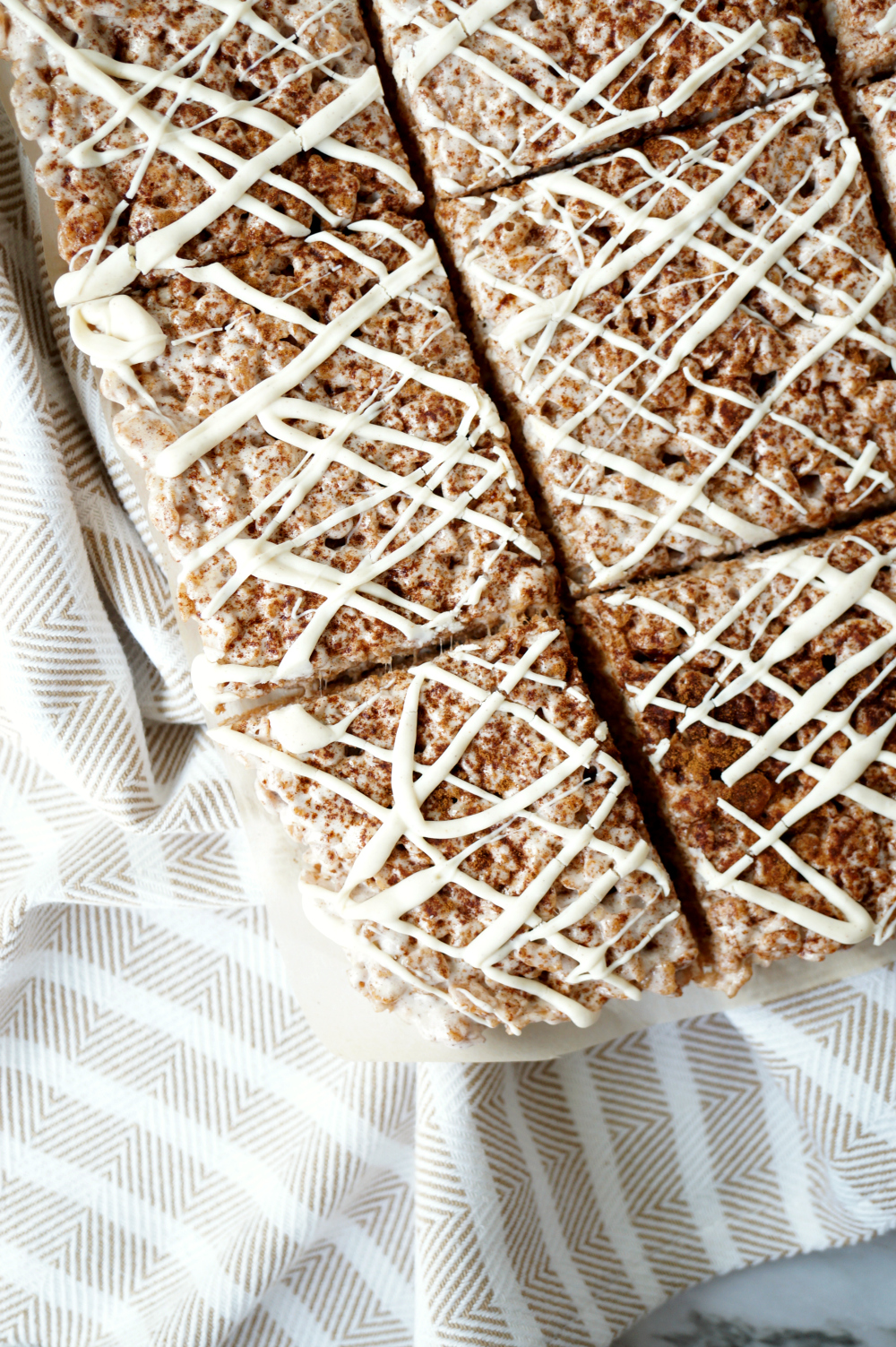 Hiiii friends and happy Fourth of July Eve! Is that a thing? I've decided it's now a thing. So I definitely dropped the ball on all things red-white-and-blue this year and I don't have a themed dessert to share with you. BUT - I have these, and I can promise you they are the greatest ever. These Cinnamon Roll Rice Krispie Treats require just 5 ingredients for magical, gooey, sugary perfection. Maybe they're not the same colors as the American flag, but I can guarantee you'll be the most popular person at the party if you bring these. 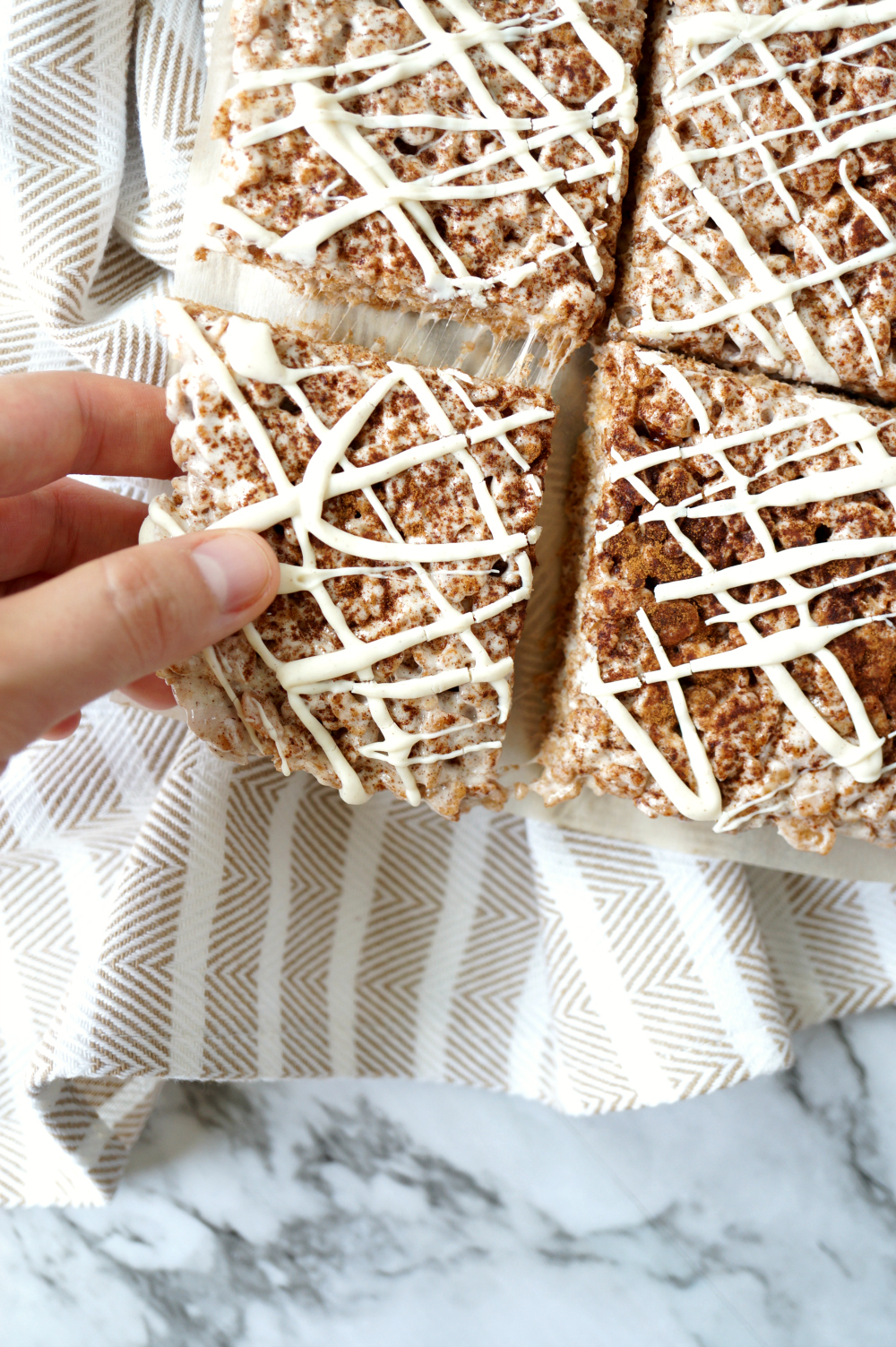 Okay, so cinnamon roll rice krispie treats. I can tell you I went back and forth a looooot on what to name these (between what I picked and snickerdoodle rice krispies). They're both such cute names and it was so hard to make a decision! I even posted a poll on Instagram and the split was like 55/45 but it kept wobbling back and forth all day. Clearly you guys couldn't pick either. I had some people taste-test though, and everyone who tried them voted unanimously for cinnamon roll! I think it's that gooey, squishy, pillowy factor that gives it away. ? 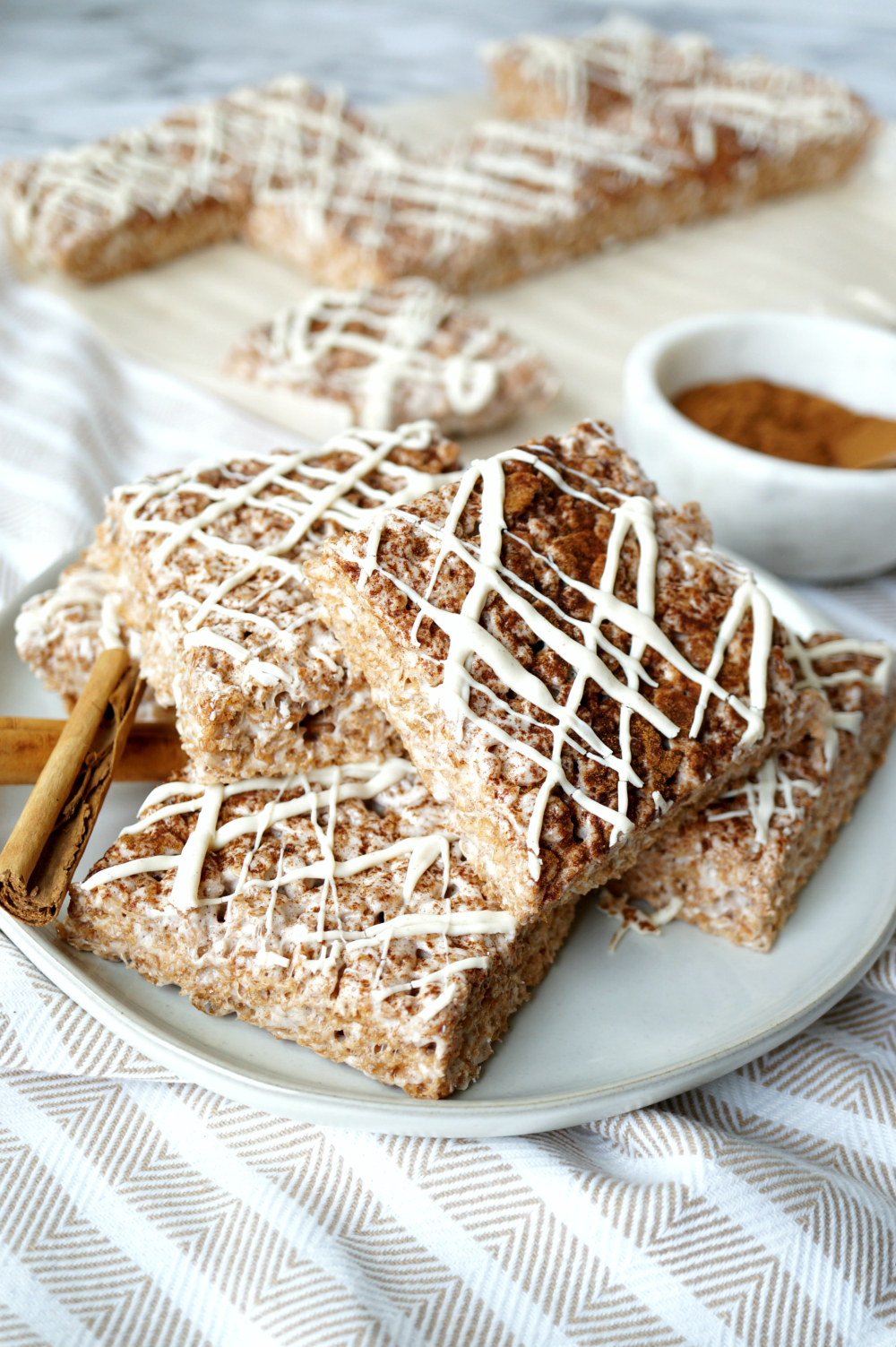 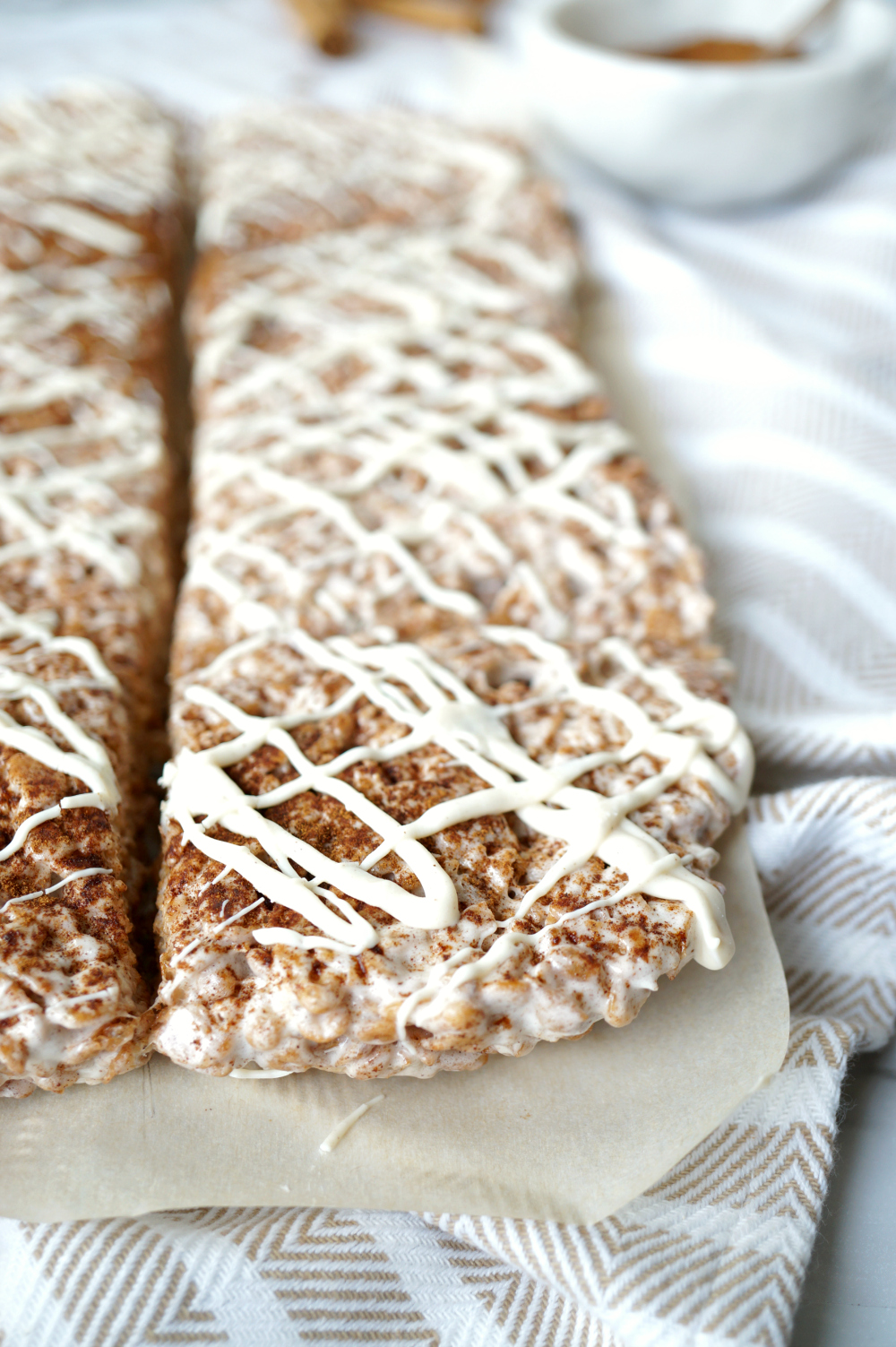 I really wasn't kidding when I said all you need for these cinnamon roll rice krispie treats is FIVE ingredients! You just need marshmallows, cinnamon rice crisp cereal, butter, cinnamon, and white chocolate or white almond bark. Thats. IT! And if you want to make it even quicker, you can skip out on the chocolate... you only need it for the drizzle on top, there isn't any actually inside! So when I set out to make these rice krispies, I knew I wanted them to be really gooey, squishy, and soft. There's tons of recipes online but most of them call for marshmallow creme {which I didn't want to go to the store to buy because #lazy} so... I made it work without! The secret is you need equal amounts of cereal and marshmallows. I know it seems like a lot but that is how you get these to be soft little magic pillows. Trust me. 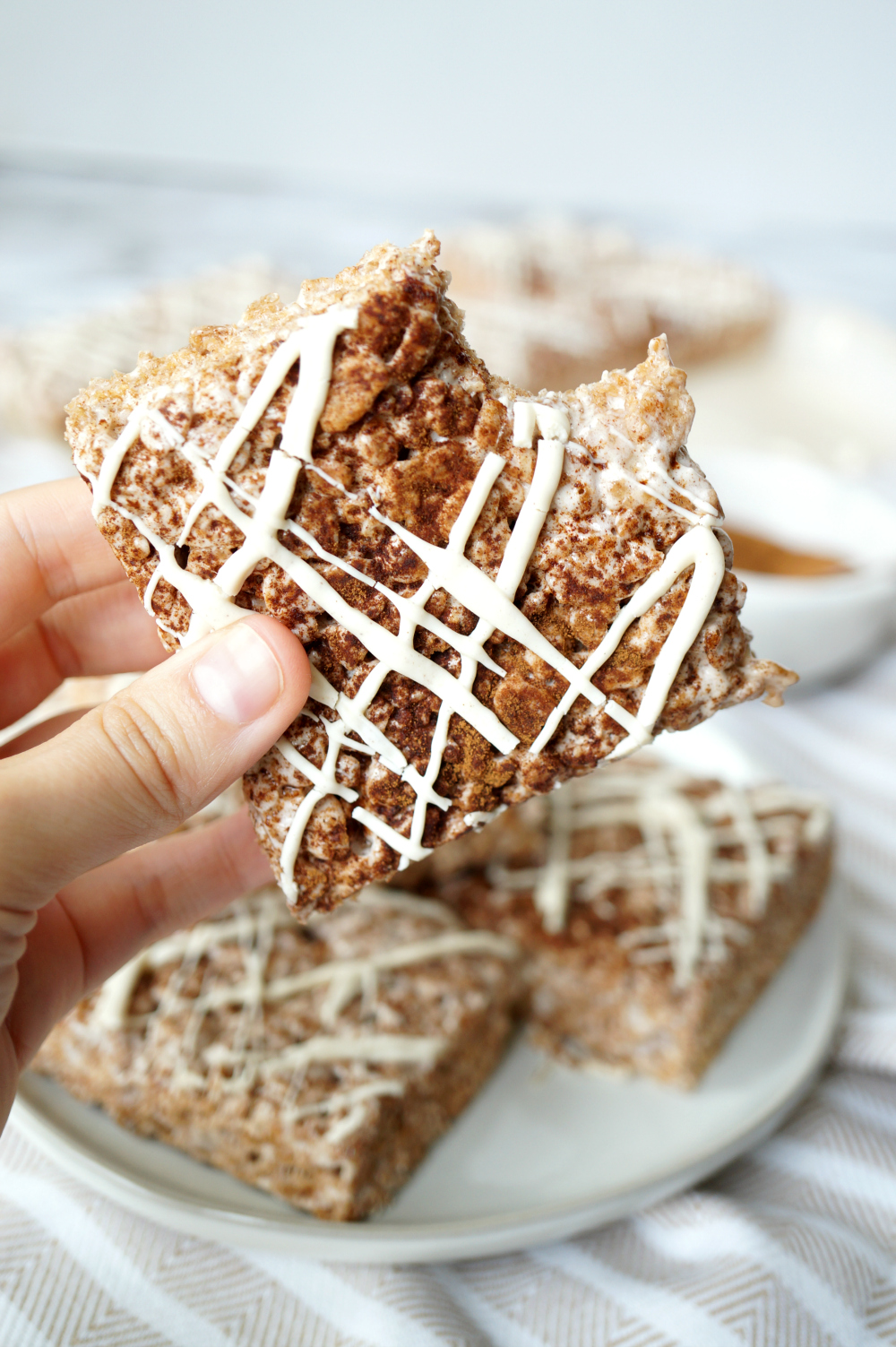 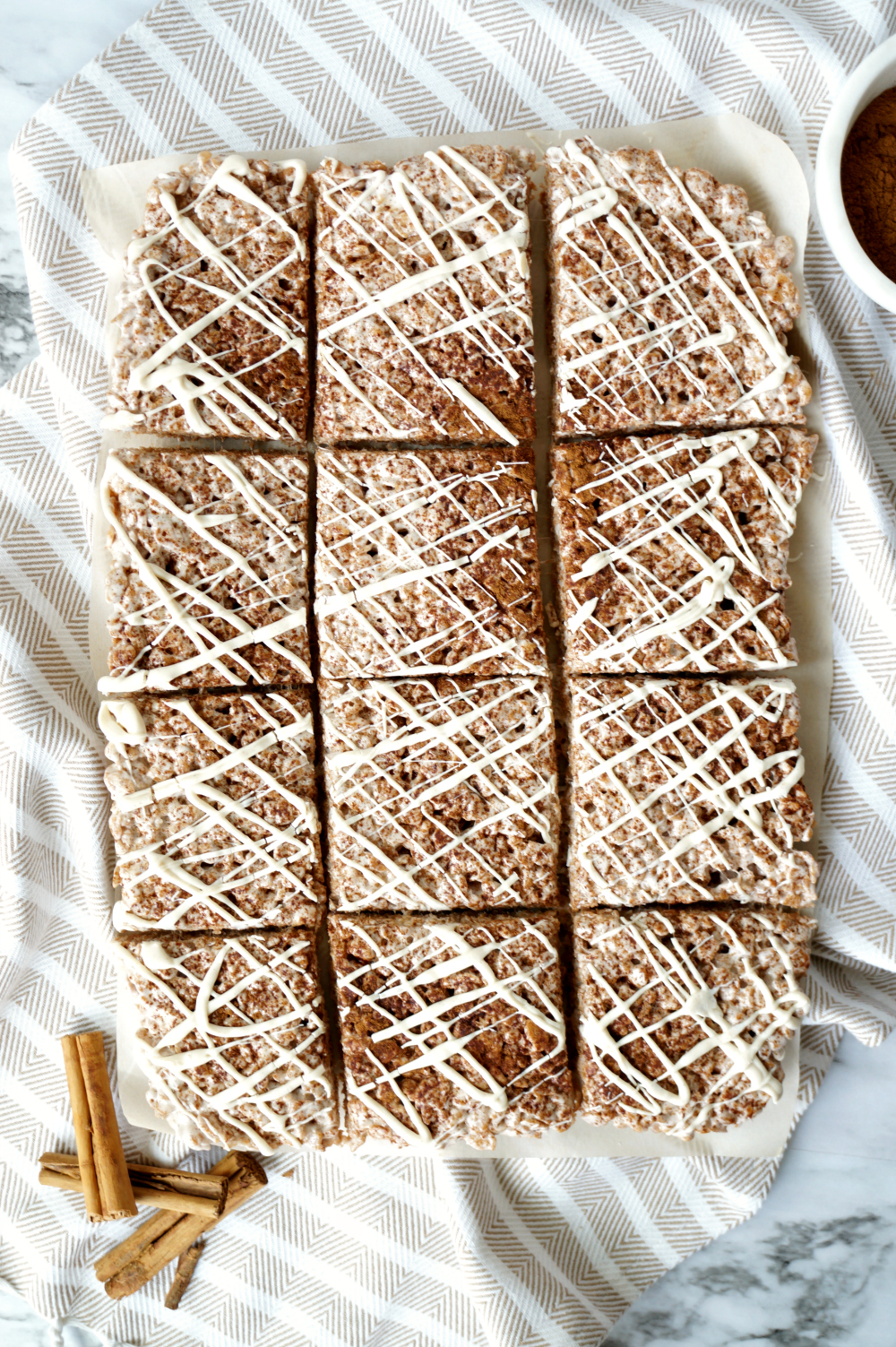 I hope these amazing cinnamon roll rice krispie treats will make an appearance on your Fourth of July festivities! Or like, just because. I promise you'll become OBSESSED. I personally can't stop eating them and it's become a bit of a problem. 😉 Happy eating!

P.S. for the cereal, you are more than welcome to use plain crispy rice cereal but if you can get your hands on this cinnamon one... I promise it makes SUCH a huge difference! Yum!

P.P.S For more trashed up rice krispies, check out these Nutella ones and these Special K bars!