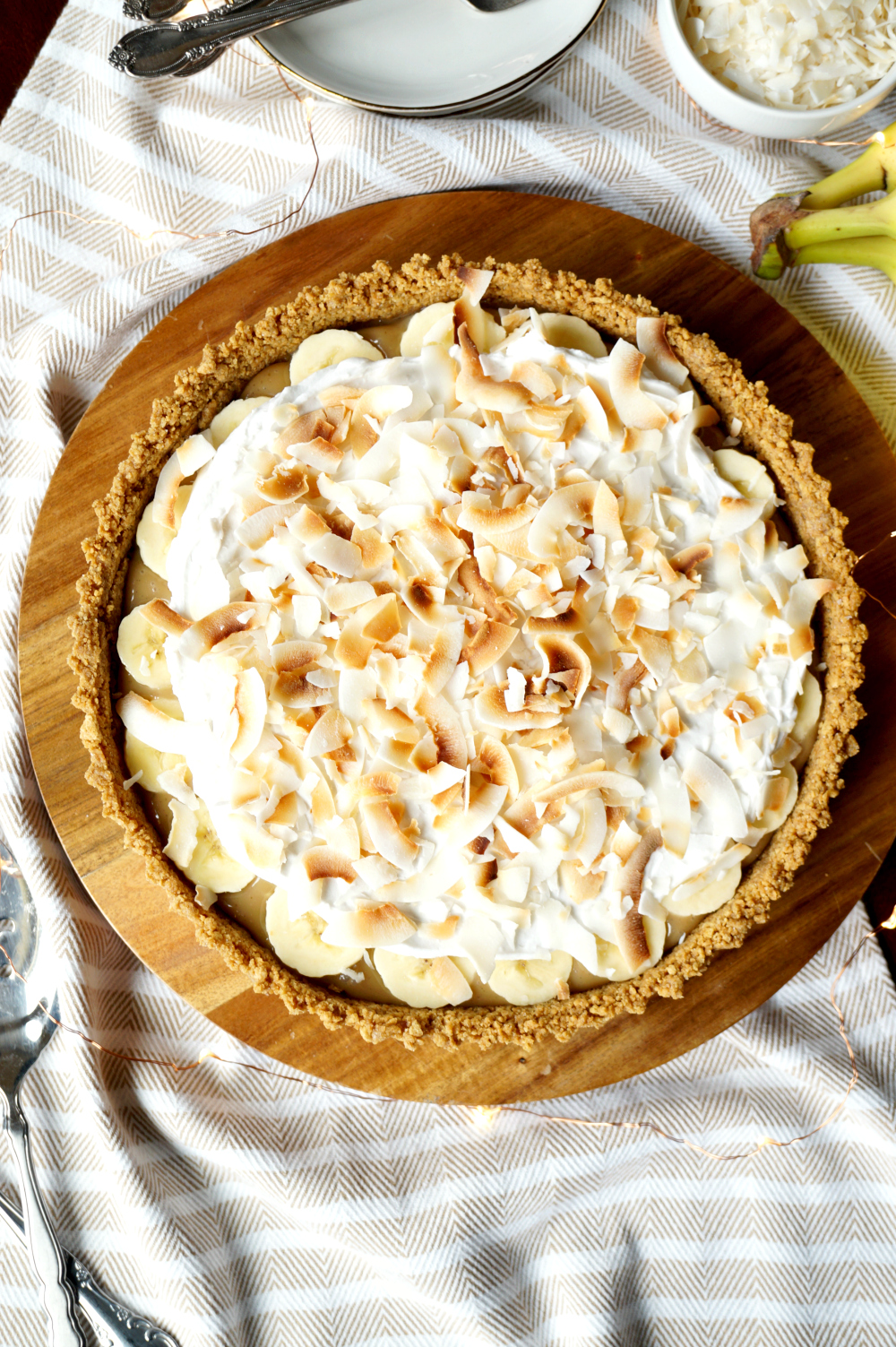 Hi friends and happy Wednesday! I am trying to really load up on the recipes this week since next week is already Christmas! WAH. Where does the time even go?! Today I have this incredible Vegan Coconut Banoffee Pie and while it may not be especially Christmas-y, it is dang delicious. I promise this is worth making any time of year! It's also super simple! You just make an easy graham cracker crust and whip up a coconut caramel sauce, then top it with sliced bananas and whipped coconut cream. Sprinkle on some toasted coconut shavings for good measure and my friend, you are all done. 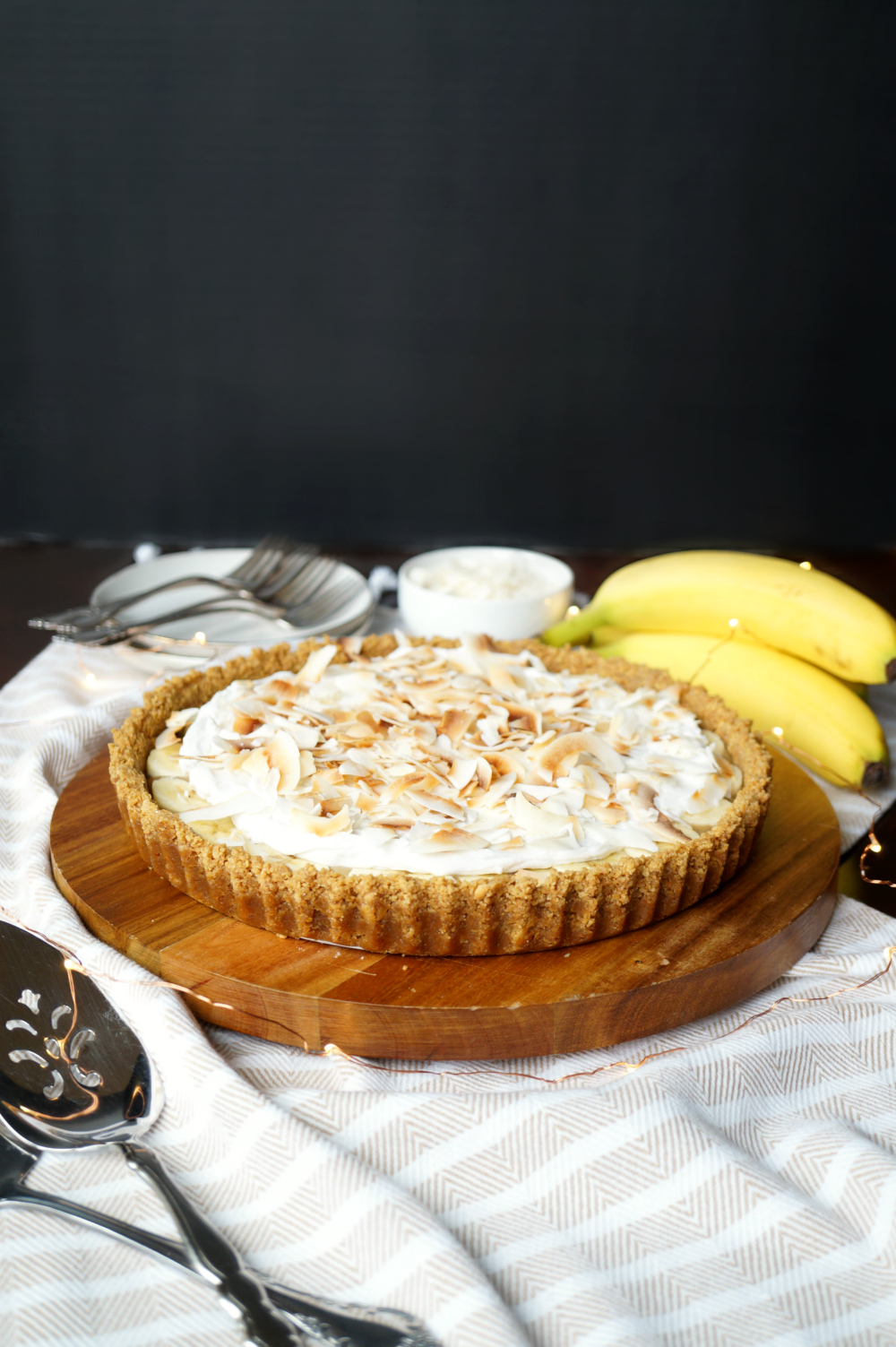 I have to confess that since I finished up school the other weekend, I have been watching a lot more tv shows than normal. And for me, the tv shows are usually cooking shows! I am getting through the latest season of British Baking Show on Netflix and I just love it so much. I watched the vegan week episode last night and it was so fun! They made the most gorgeous vegan pavlovas so... you know who else will be baking one soon ? My other recent obsession has been the Holiday Baking Championship on Food Network, and what do you know... of course they had a pie episode. And someone made a coconut banoffee pie, which then inspired ME to make one too! 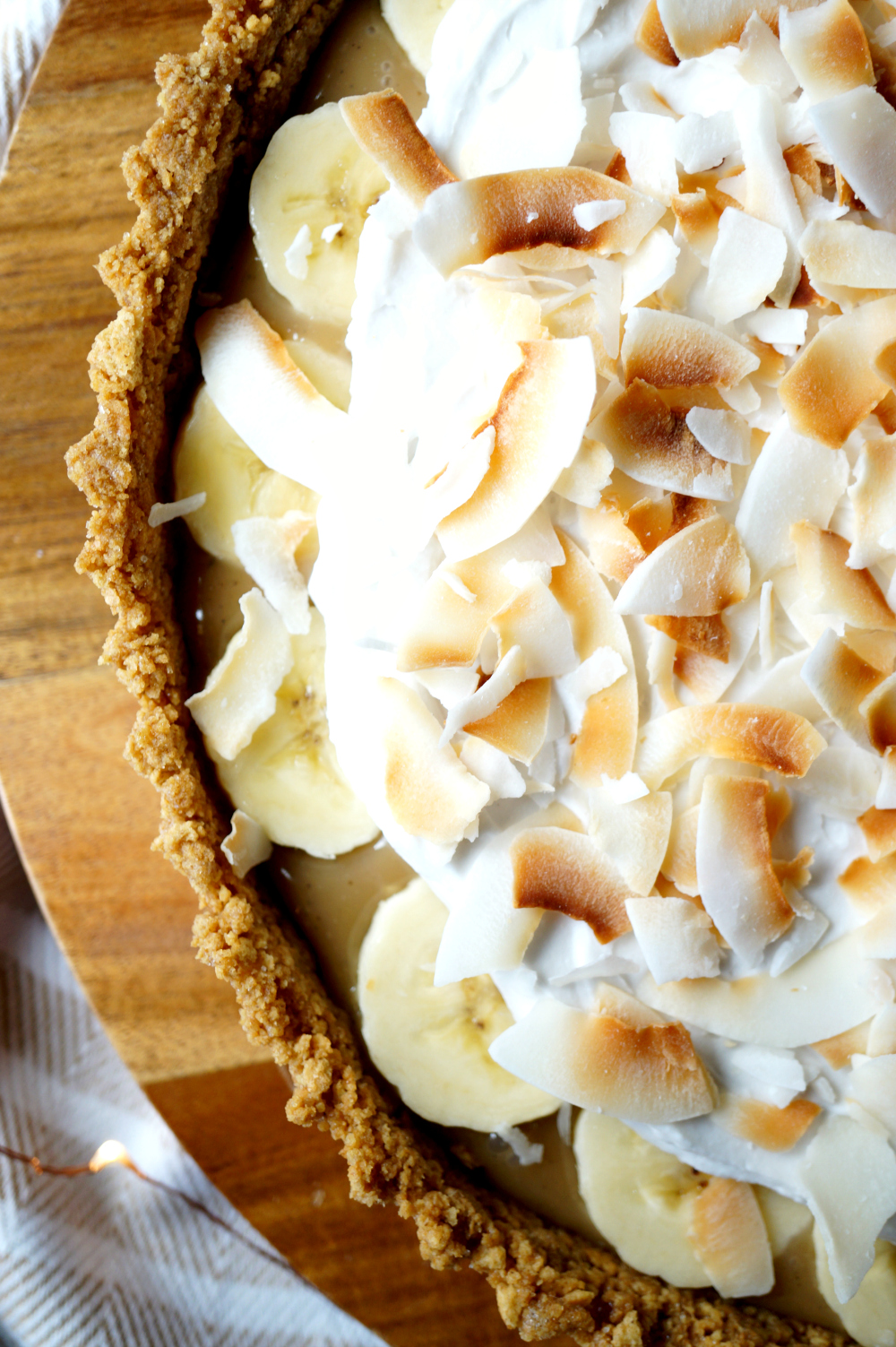 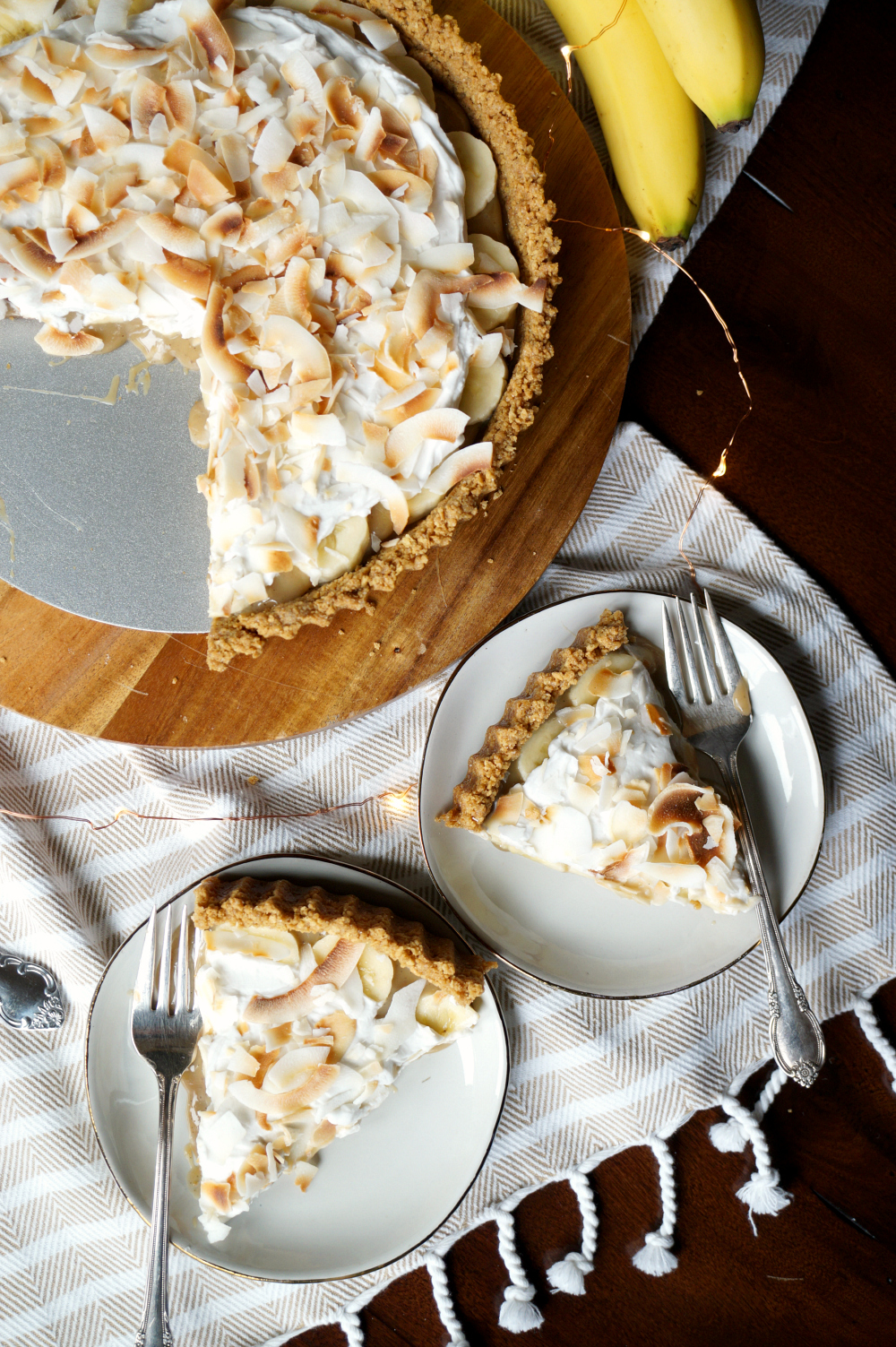 I've known about this classic British dessert for ever, but I've never had the pleasure of making (or eating) a banoffee pie. Like I said earlier, it is criminally easy and I know I'll be making it again soon. My family ate the whole thing in literally 24 hrs. It may be a new record! ? There's just something about the combination of creamy toffee sauce, fresh bananas, and fluffy coconut cream that is super addicting. It does also have the bonus of being a cool pie which makes it a little more light and less cloying than the usual fruit pie. 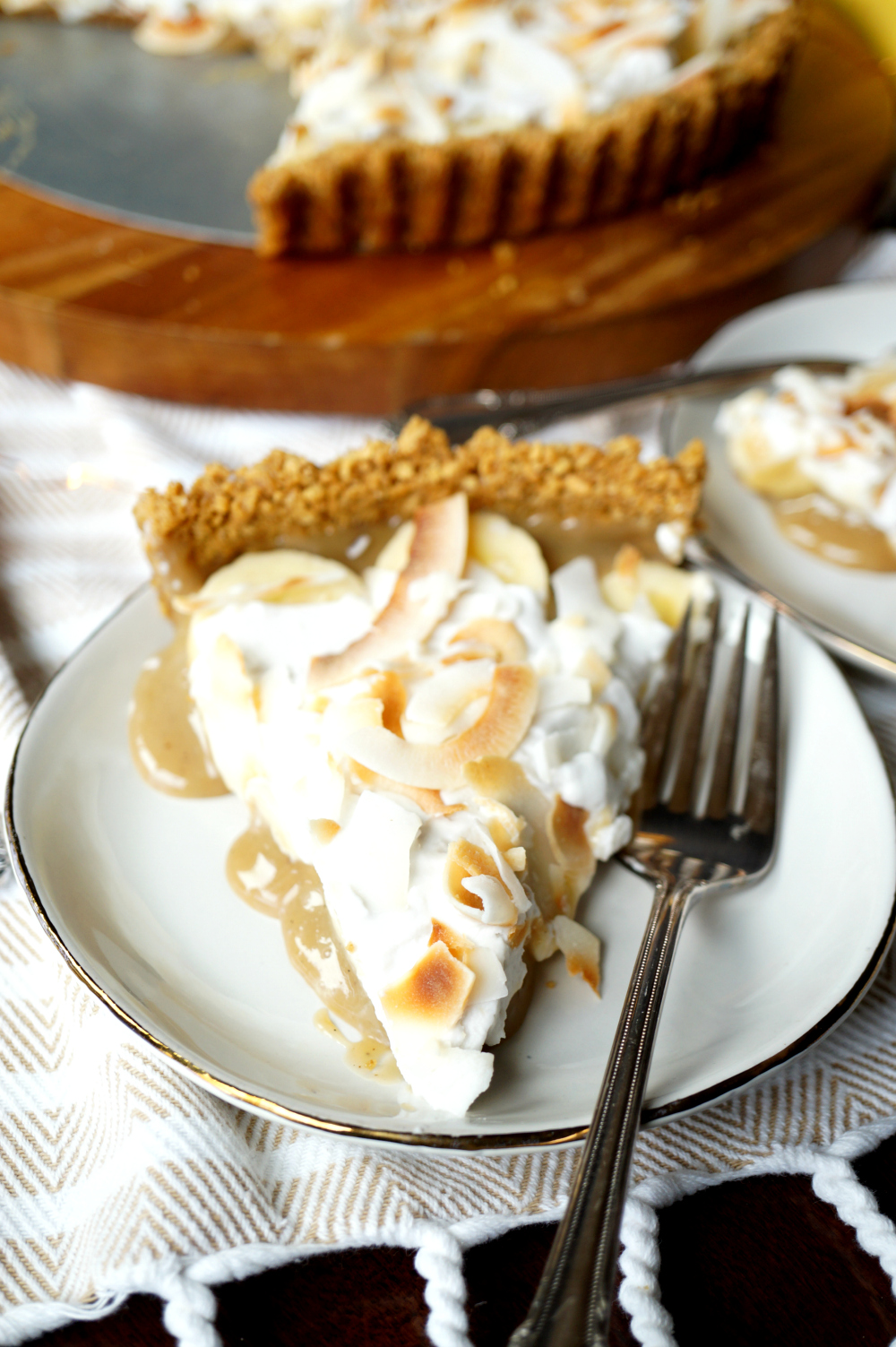 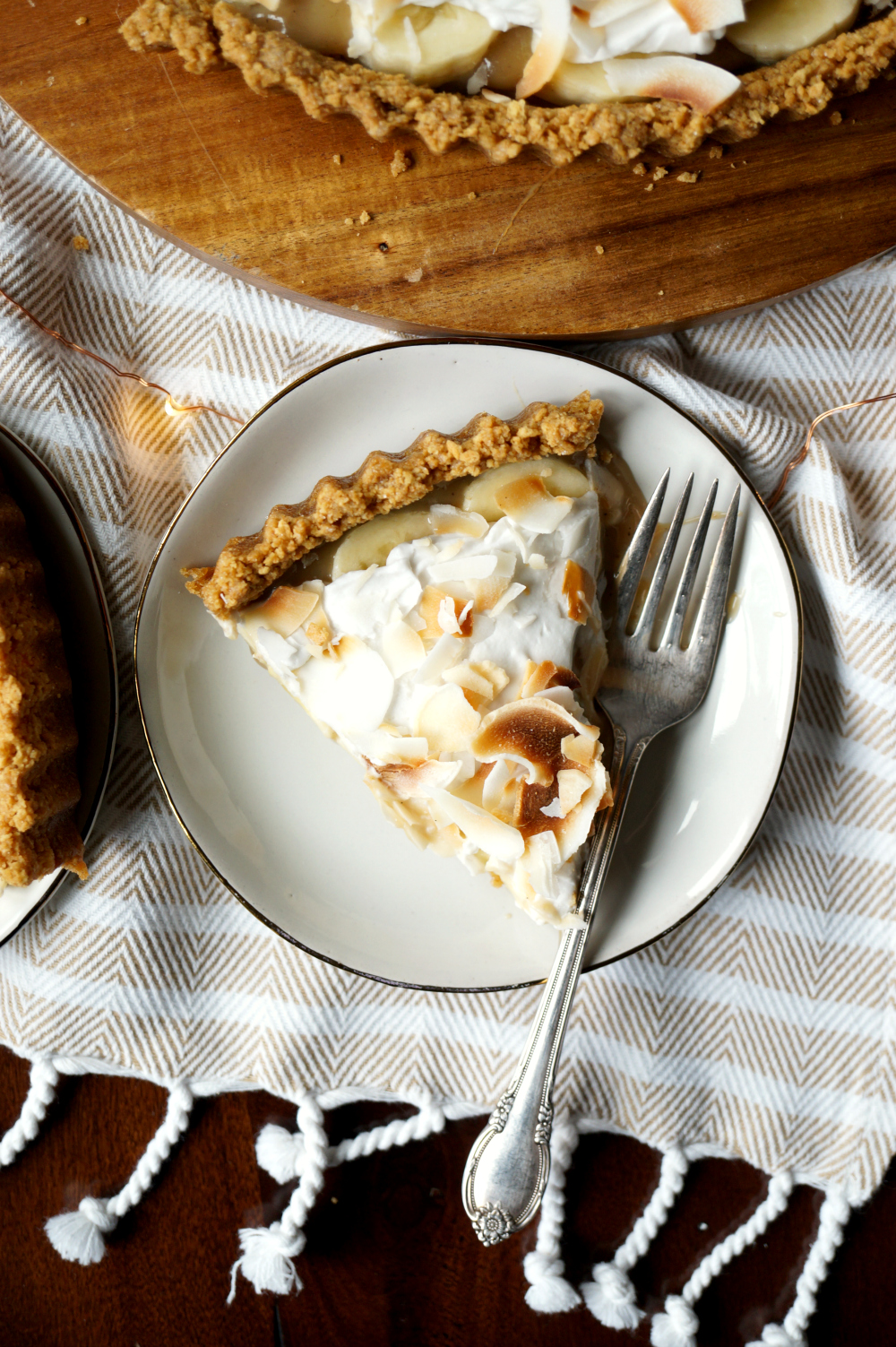 I hope you guys will make this vegan coconut banoffee soon! It is honestly LIFE-CHANGINGLY GOOD. If you want to take an extra shortcut and save yourself some work, you can definitely use a store-bought graham cracker crust. Just double-check the ingredients, but most are accidentally vegan! My other comment is if you don't want to play up the coconut, sub the coconut pieces on top for some shaved chocolate! I know both the caramel and the whip on top are made of coconut, but it's really not very strong. The banana is definitely the main player here 🙂 Happy baking!

Save Print
Prep time
15 mins
Cook time
55 mins
Total time
1 hour 10 mins
This Vegan Coconut Banoffee Pie is super simple to make and delicious! A graham cracker crust is stuffed with homemade coconut toffee sauce, fresh bananas, whipped coconut cream, and toasted coconut shavings on top.
Author: Valentina | The Baking Fairy
Recipe type: Pies & Tarts
Serves: 12
Ingredients
Instructions
3.5.3251
*Disclosure: I am part of the Amazon Associates Program, and there may be affiliate links on this page. If you buy anything through my website, I will receive a small percentage of the profit at no extra cost to you. Thank you for supporting my blog!*